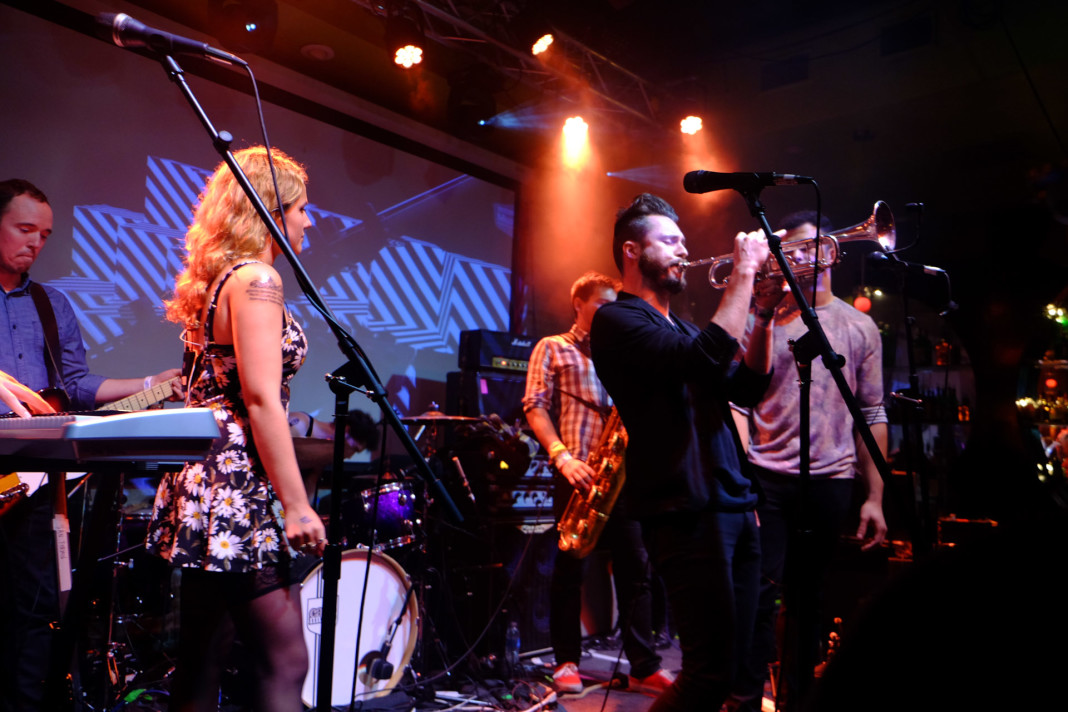 San Fermin is a project by Ellis Ludwig-Leone. While being the keyboardist, he also composes the music and writes the lyrics for their first LP and sophomore album, “Jackrabbit.” The band consists of seven other talented musicians, Allen Tate (lead male vocal), Charlene Kaye (lead female single), John Brandon (trumpet), Rebekah Durham (violin), Stephen Chen (baritone sax), Tyler Mcdiarmid (guitar) and Mike Hanf (drums). Recently, RadioUTD got to sit down with Ellis and ask about his upcoming project, touring, Dallas, and annotations:

RadioUTD: Is this tour winding down?

San Fermin: This tour is actually just a weird one week thing, and then we’re basically done playing headline shows until this next album cycle.

Radio: Wow! So, what can you tell us about this third album? I’m really excited!

SF: Well, you’ll hear a lot of it today actually! We’re gonna play five new songs today. Everyone’s nervous. It’ll be fine [laughs]. Third album is cool we’re still working on it. I have like fourteen songs in a sort of various states of disrepair, and I’m gonna try to record it this summer. It’s a little more lush than the second album- it’s a little maybe warmer. There’s some hypnotic aspects of it- we’ll see- I’m still writing [laughs].

Radio: Something interesting I noticed – I’m not sure if this is right- but your first album was very romantic and almost fanciful, while the second gets very realistic and I don’t know kinda-

Radio: Right! Can I ask what happened there in between the first and second?

SF: Basically I think it started when we were touring and I think that really changed my perspective on a lot of stuff. It was suddenly my sense of who I was and my sense of home was weirdly split in half very quickly. Personal relationships were strained from that, and also just the process of being basically gone half the year. I feel like I had turned into two different people, and I feel like with that record I was trying to get the sense of a person splitting down the middle a little bit. When I wrote “The Woods” I put this big crazy tear in the middle of it with the saxophone and same thing happened with me in Billy Bibbit, I basically had a very violent relationship with the pretty stuff I was writing. I think I’ve toned it down a little bit now though.

Radio: Do you feel like travelling broadened your perspective of the world or do you think it got kind of overrated?

SF: I think it really broadened, but it broadened in this really weird specific way, just from a pragmatic perspective- I’ve been to every state now. Before I started this band I had only ever been to the east coast and California. I’ve basically seen a lot of rest stops and rock clubs, so it’s this weird thing where I feel like I know these cities but not at all. You sort of close down to these new experiences a little bit, because it’s almost self-preservation. The band becomes this tight-knit group, and we put the blinders on a little bit, because it becomes too much- at least for me. I think the perspective of music festivals and meeting all these bands who I’ve always looked up to has definitely changed and broadened what kind of music I can write.

Radio: There are so many of you guys. When you guys get back to Brooklyn, after travelling for so long together, do y’all remain close or need some space after all that?

SF: Well, it’s funny, because everyone – except for Rebekah (violinist) who moved to Colorado – most of us live a few blocks from each other. So when we get back it’s like a mixture. Some people recede, some people need the group more. It changes from tour to tour. I find that I like to stay in touch. We have this organic ebbing and flowing

Radio: Of all the shows you played, what was the pinnacle of what you’ve been wanting to experience since you started this band?

SF: I guess a couple, one was when we were in Austin when we played at Austin Music Hall with Alt-J. That whole tour was pretty cool and we were playing these huge rooms and they were really nice to us and it was a cool experience, but after that show we played ACL. The show was at midnight. There’s something about after shows where everyone’s drunk and people are really into it and we had this huge space really rocking. I do remember feeling onstage “Dude, you better savor this moment because this right here is really special.”

Radio: Haha, well you mentioned Austin, and because I’m interviewing you for RadioUTD – I want to bring up Dallas. I feel like growing up in Dallas I’ve noticed that a lot of bands tend to favor Austin more than Dallas. Have you been surprised by what the Dallas scene has to offer in terms of its music scene?

SF: My thoughts on Dallas I suppose are limited to two data points so far haha, but from a music perspective I think bands get bigger crowds in Austin. We will certainly have a bigger crowd tomorrow than we will have tonight, so I think that skews bands to Austin more in that regard. I think Dallas to me – just from a total outsider perspective – seems more like Austin’s well-to-do older brother that isn’t into that indie shit, but will show up and actually be a cool guy once you get to know him. Last time we were here we did not have that much of a crowd, and then last time we did South Side with Alt-J. Tonight we will have a bigger crowd, and I think the better the experience the more I can explore.

Radio: What is your connection to your hometown, and does it play a factor in how important that show ends up being for you?

SF: I consider New York to be my hometown. That’s where all my friends and family are, and it becomes a bigger deal. I think those shows end up becoming more nerve-wracking than a homecoming kinda vibe because I can see my dad [laughs]. They’re also very important.

Radio: With your albums it feels that it can be hard to analyze and everything is hidden. Do you wish that people knew exactly what you meant or do you want them to take what they can?

SF: That’s a really good question. My answer has changed on that. When I first made the record, I was definitely thinking that I was making this huge textured document and I wanted to explain exactly what I was thinking. I remember when I talked with Genius and literally sat down and told them everything and they really didn’t want to put in what I wanted. They kept asking stuff like “Is this part here personal or what” and they’re really nice guys, but I realized as I was doing it that I value more people having their own personal experience with the work than what the annotations tell them. Now I just want everyone to get what they need from it, there are no wrong answers in the decoding of it.