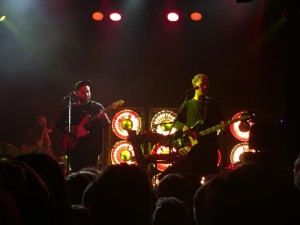 On a cool Tuesday night, Lower Dens and Unknown Mortal Orchestra took Trees’ stage and warmed up a chilly crowd. The air heated up rapidly as more and more people filed in to see the opening band, Lower Dens, rock out. What looked like a sea of high-school aged kids were shouting and acting restlessly as the set time got closer and closer. As soon as the curtains opened, Lower Dens commanded the audience’s attention by breaking into the smooth bassline of “Your Heart Still Beating” off of last year’s record “Escape From Evil”. Frontwoman, Jana Hunter, put on a captivating vocal performance, and her guitar playing was nothing short of entrancing. Hunter, along with drummer, Nate Nelson, performed what sounded like a flawless show. Though, their most amazing feat was doing it alone. Two of the other band members were nowhere to be seen. The whole non-guitar-non-vocal set-up was being controlled by Nelson on drums. Despite Lower Dens’ melancholy, often abrasive sound, Hunter was extremely warm when addressing the crowd. She went on for a little while about growing up in Arlington and seeing shows at Trees when she was younger, and even exchanged a few words with audience members. This is when the overall tone of the performance shifted. Hunter invited a local cousin who attended the show onstage to dance while they finished their set. The dancing can only be described as pseudo-tribal-interpretive dance. Between occasional underwear slips and what looked like off-rhythm jogging in place, the dancer found a way to upstage the whole band. Despite the awkward dancer, the band continued to sound great up until the last song. The closing song was described as pre-Lower Dens, and consisted of Hunter belting out soulful lyrics acapella. What was intended as a powerful closing number turned into a confusing joke, as the dancer shook her body around the stage– at one point even moving her arms around Hunter. The crowd was obviously in a state of confusion, and murmurs turned into loud exchanges as Hunter attempted to overcome the crowd’s sudden change in focus, to no avail.

When Unknown Mortal Orchestra (UMO) finally took the stage, the sold-out venue became absolutely packed as audience members swarmed from all sides and pressed up against each other chest-to-back. As the curtains cleared, UMO jumped straight into the jam “Like Acid Rain” off of their new album Multi-Love. Seconds into the song, it became obvious that UMO were going to put on an amazing performance. The sound was impeccable. Every instrument fit into place perfectly as the group began jamming in hazy, funky, UMO fashion. Frontman Ruban Nielson belted out the the lyrics to the song with such soulful passion, it almost upstaged the rest of the band. That was until Nielson’s guitar solos began. It seemed like each song featured a longer and more awe-inspiring solo than the last. The band even started to switch off solos between drums, keyboard and guitar. Drum solos are not typically common when you see modern indie-pop bands play, but UMO are not the typical indie-pop band. The touring drummer dropped into what must have been an over 4-minute solo that verged on mind blowing: switching time signatures, utilizing multiple drums, creating insane rhythms, and then finding a way to beautifully transition it into the next song. UMO played all of the hits off of their newest album as well as their previous ones (“I” and “II”). The crowd threw mardi gras beads at the band, danced furiously, and even began to fight on one side of the stage. Spirits were high. The room was on fire. And then Nielson stepped into the crowd and began walking through it, belting out lyrics as the crowd sang, grabbed at him, and took pictures. The high-energy show was followed by an equally intense encore consisting of the heavily danceable “Can’t Keep Checking My Phone” and then the smooth slow jam, “The World Is Crowded”. As quickly as they had come, UMO left the stage. The crowd filed out onto the cold street. The energy from inside Trees seemed to radiate throughout the Deep Ellum sidewalks.