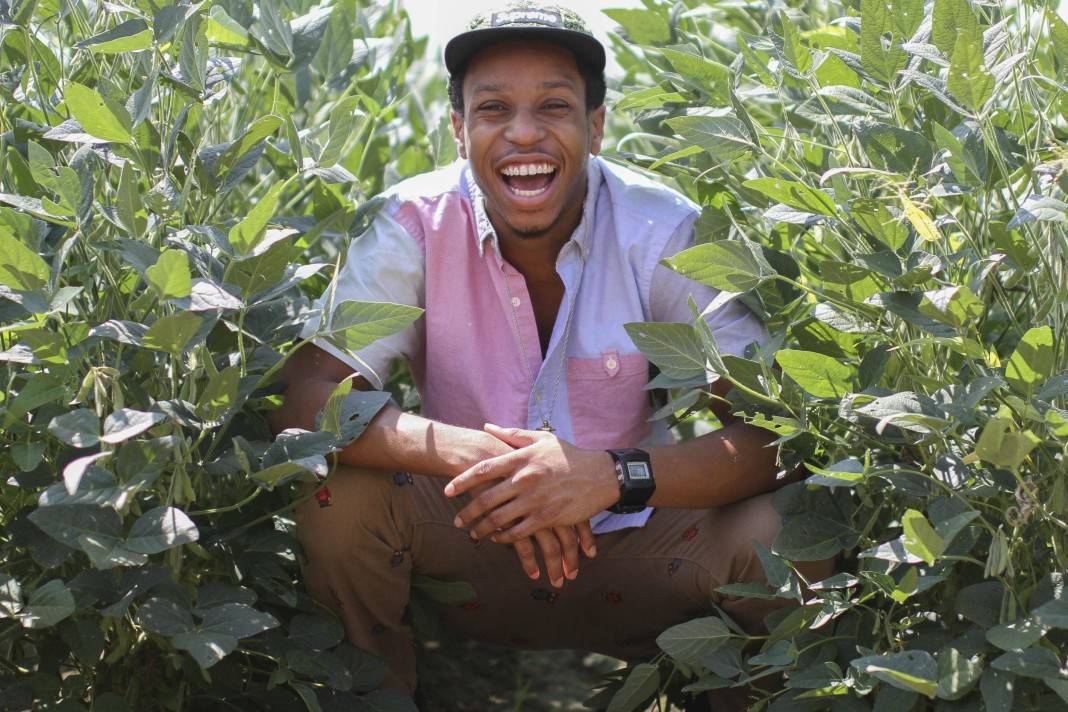 A New Orleans rapper with a rash of influences, Pell is one of the leaders in a new age of hip-hop fusion. Coming off his newest release Limbo in November 2015, Pell has been touring all over the United States. His music is difficult to assign a genre to, and he shows off an impressive repertoire ranging from modern, growling tracks to organic sounds inspired from his hometown. Throughout it all, Pell has kept his signature R&B and rap flow. With a growing discography and distinguished collaborations under his belt, Pell looks to the future, building off his previous releases in order to continue his musical journey.

We had a chance to talk to Pell. He’s riding through Dallas on February 26 via Score More. Tickets still available here.

RadioUTD: First off, how do you like to be called? Pell? Jared?

Pell: You know, today I’ll go with Tuck cause I like to get to know people first. I got a bunch of people calling me Jared, though I do think it’s important that people know my name is Jared. Cause that’s the name my mom gave me but, just in conversation usually, it’s the name I use with my friends.

RadioUTD: I’ve listened to your albums for a while and I’ve heard it described as “dream-rap”, can you tell me more about that?

Pell: See like, it’s funny. Before concerts and releases I never was the one who coined it as “Dream Rap”, it just kinda happened. Fader posted an article about it, and I kind’ve went with it because that’s what people sonically thought that it reminded them of, but I never really had a solid connect to dream rap because I think it like pigeonholes it too much. While the overarching theme of my music centers around dreams and goals, I don’t think that it should be prison-held to it. When you talk about it, “[Pell] makes dream rap”, not all of my stuff sonically sounds dreamy or mellow or chill. That’s what I think was one of the biggest feats in putting out Limbo in my opinion because it was one of those albums that has so many different tracks over the spectrum. You can’t call me one thing. As an artist I want to continue to reinvent myself as many times as I can just because that’s what my favorites do. That’s why I’m kinda against the dream rap thing. But I’m more of an experimenter, I’m a mad scientist, trying to make sure every available sound has been exhausted and I can push my voice and push my lyricism, push what I talk about, subject matter wise as much as I can. I think that’s something I do better than anybody else in the game right now. Talk about things outside of cars, clothes, the dreams money can buy.

RadioUTD: Your latest album release, Limbo, seems to be really synth heavy, but your latest single release “In The Morning” is very organic and seemed like a completely different change in tone. Is this the sort of spectrum you’re hoping to cover?

Pell: Yeah, my main thing is not being predictable in 2016. I feel like everybody wants to have something that makes them unique and makes them stand out. Not even just stand out, it lets you know where they fit in. I remember I used to hear in A&R [artists and repertoire] meetings with labels, “So where do you fit in? Where do you think your sound is?” I don’t think my sound fits in everywhere so it’s hard for me to just minimize myself and just be like “I want to make something that has heavy synth all the time.” I’m not a static individual. I don’t feel any artist is, but I feel like there’s a trap where you have to brand yourself and, in turn, your music. You have to make sure your music has to represent the diverse tastes you came from.

RadioUTD: It seems like your sound has really evolved. You’ve had New Orleans roots and Southern roots, but how did it really start? How did you get involved with music?

Pell: What got me into music, what really got me into music, like really shinned it to my head, was originally Gym Class Heroes. I was a huge fan. Crystal Skulls, Vampire Weekend. I wanted to be cool and play instruments, but at the time I was in between New Orleans, Mississippi. I had just moved because of Hurricane Katrina. I didn’t want to pressure my parents into buying me drum sets or guitars or any of that stuff. We were trying to salvage the things that we did have. We had to rebuild our lives, so I wasn’t really focused on what would’ve been considered trivial things then. I took advantage of the fact that I had a laptop and started making hip hop because it’s kind of in history. It’s something that inner-city kids or people who don’t have access to instruments use to have a creative outlet. I made beats for my friends and furthermore I listened to a lot of Fuji, Tribe Called Quest, Kanye West, Lupe Fiasco. My diet went a little deeper into deeper cuts of hip-hop, The Roots, Joe Scott, John Legend. I feel like I had a heavy northern influence while being in the South. Not that I didn’t get along with all the stuff in the south, but my perspective wasn’t that Eugene K. southern player. My outlook on life was different than that. My parents were educators, I didn’t go to clubs. I had access to all that but that didn’t mean I was living the exact same life. I looked at people that were able to talk about environments outside of the stereotypes. It was cool for me to use those influences and apply them to my life and things that I experienced. I was able to blend the two. You have like “Dollar Stories” and Floating while Dreaming. I wanted to make sure people understand where I was coming from. I could’ve done well and stayed in college, but I love music. I wanted to talk about things I wanted and other stuff like being able to tell my story. That’s what I think is most important and most lacking in hip-hop. Everybody’s telling the same story but not everyone’s living the life. You have to be able to tell your experiences as well as the experience of those close to you, like people who are like you or want to be like you. They may not have the courage to talk bout their stories. It’s nothing that hard pressing, but they may not be able to relate to other things that we can relate to but you speak to them, you’re speaking for them. That’s what all my favorite artists do.

Pell: I definitely had some doubts. I always thought I had some good stuff but I was never a 100% sure how it would be perceived by mainly my family. I felt my friends knew me as an artistic person. It didn’t take much convincing to spill my soul and being a little vulnerable as I like to be. I didn’t think that would be a problem for [my friends] to hear that because I’m like that in casual conversation. As far as my parents, my mom, my dad, they said, “Whoa, you feel this way about this situation or you feel this way about this situation”. It’s crazy because I didn’t have those conversations with them; they heard it through the music. It was more of a wakeup for them. That was something I did have to get over, the perception from parents because their opinion matters more than anybody, any critic.

RadioUTD: It sounds like it was a good way to connect with them.

Pell: Definitely, it seems like my parents love me because of that now. It’s good.

RadioUTD: You mentioned telling your story, tell me a little more about that story. You talk to your listeners about growing up and following your dreams, but is there anything else you wanna tell them?

Pell: I feel like I want to tell a story of happiness, achieving true happiness outside of the material things. Not in a hippy way, but life is really about love and sharing love with those who love you, people who you’re in contact with. Sometimes that’s missed a lot of times, you see people being static and too hard pressed on being tough because it’s a cold world. You can’t run away from that but you still have to be like “I’m a man, I stand on my own too.” But it’s more important that you make sure you find beauty in the little things and I wanna make sure that message is always given across because life is a journey and you need to experience it with love in order to really appreciate it. That’s all I really want to do. Also I want to be that voice of creativity for all those kids that are coming up in a world where everything is possible. I wanna make sure kids listen to Pell and go on to do great things. Kinda like Tupac said “I don’t have to change the world but I would want to make music that did inspire others to change the world.” That’s really what I want to spread to the youth as well as to anyone who listens to music, from age 6 to 60.

RadioUTD: In terms of everything else, you’ve been putting out music every month or so. You just released Limbo just a few months ago, but can we expect anything this year? What are you looking forward to this year?

Pell: I’m looking forward to doing some really cool creative stuff, I’m getting into film and TV, heavy. I’m really trying to push that, I really want to get into creative stuff in those realms because I want to spread my wings when it comes to creativity. There’s a lot of ideas I have that haven’t gotten out yet because I’m still focused on music and I’m still working on my next album. I’ve already started on that. It’s gonna be beautiful. I’m really just looking forward to making sure I can work with a lot of my friends. Limbo was a little more isolated and I wanted to make sure that, on this new project, I collaborate with the people who have collaborated with me over the past years and bringing them on to my way. Getting the best of both worlds type of situation where I take influence from those who have helped me out over the years.

RadioUTD: It sounds like you have a lot of things going, and we can’t wait to hear what you’ve got planned in the future.

Pell: Thank you so much for giving me this opportunity.