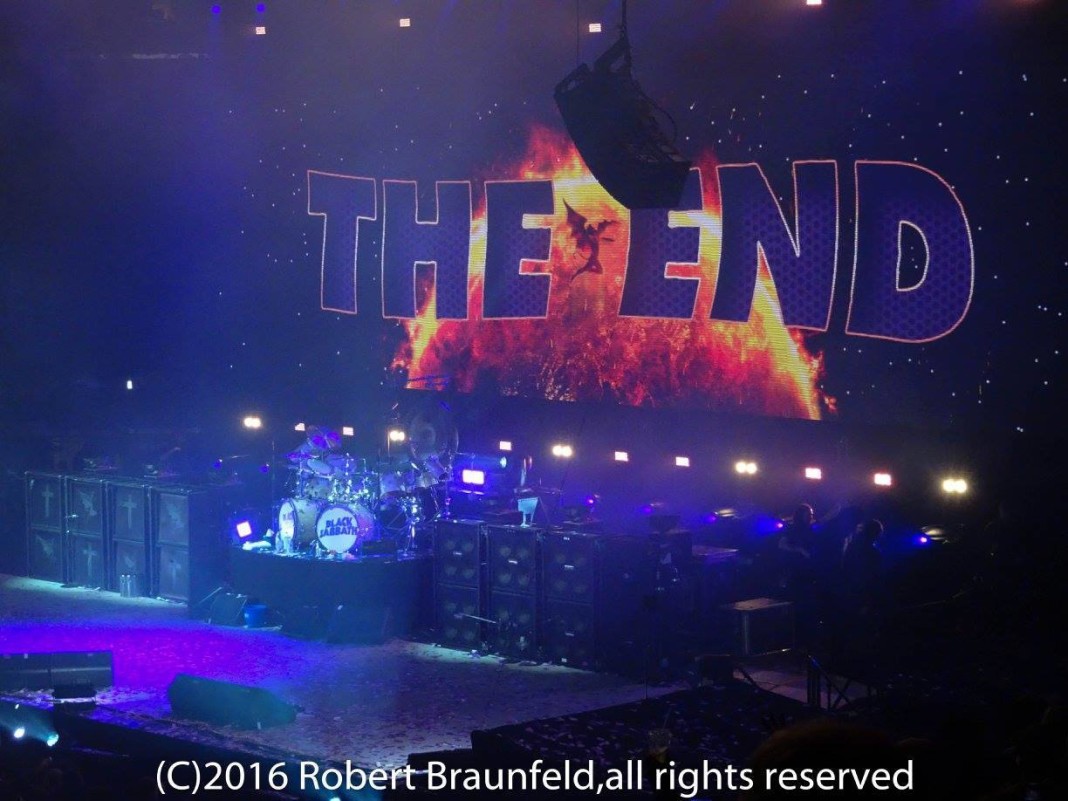 I may have been out of the rock/metal game for a while but when I heard Black Sabbath was doing a final tour I just had to find a way to go. This past Saturday I was blessed to be given the opportunity to see one of the most influential and iconic bands of all time, Black Sabbath, perform on one of the grandest stages of them all, Madison Square Garden. Sabbath’s “The End” tour was their final tour ever, and the concert was quite the experience. I went with my Dad and Uncle, both long time Rock n’ Roll fans having listened to many pioneering artists like Black Sabbath, The Grateful Dead, and Led Zeppelin since they were kids. They both gave me a lot of insight as to the history and significance of the band I was about to see perform, who essentially invented heavy metal. After arriving at the venue and taking our seats I looked around to see the crowd that I would be sharing this experience with. In this large venue packed full of people there were people of many ages, old time fans just there to see a band they love, younger generations there just to see one of the bands that created the Rock genre we know today. After a while the opener Rival Sons took the stage and performed. Rival sons were definitely a fitting opener for that rock n’ roll style to prepare the audience for the band to come. One thing I want to point out about seeing Black Sabbath, since the band had so many members come and go, is that it’s notable to state that 3/4 of the original members were performing for this tour. Geezer Butler on Bass, Tony Iommi as lead guitar, and the legendary Ozzy Osbourne on vocals. This is no small feat, as any fan of the band knows their tumultuous history, and this is part of what made this tour so iconic. Once the Rival Sons finished their set there was a short break before the headliner took the stage. The lights went dim and a video started playing on the curtain covering the stage, the crowd began to roar as the buildup began, finally climaxing with the curtains dropping revealing the band we had all come to see. The crowd was electric with excitement, everyone stood for the whole performance cheering to their favorite song, singing along, throwing up the classic two fingers representing rock n’ roll. Playing through so many of their famous songs like “Iron Man”, “N.I.B”, “War Pigs”, and “Children Of The Grave” with a great light display to match the music. Legendary guitarist/bassist Tony Iommi and Geezer Butler were going off with solos with a very long and impressive drum solo by Tommy Clufetos. I may not have followed the older generations of rock n’ roll, but I can still appreciate the music and the impact this artist has had on the genre as a whole. Unfortunately, while I may paint a lovely picture of the crowd, they were the only downside to the event. Throughout the event the crowd was great, during every song I had no issues at all with the crowd. But, when it came to the show ending and cheering for an encore, the crowd was practically silent. It was so bad, to the extent that Ozzy himself had to get on the mic and encourage chants and even then the crowd didn’t get very loud considering how packed the venue was. Finally, the show ended with an encore performance of “Paranoid” showering the crowd with confetti and water, to the tune of one of my personal favorite songs. Overall it was a great performance I will remember for the rest of my life, and while it wasn’t perfect, it was still outstanding and truly a concert for the ages. If you had told me years ago I would see Ozzy Osbourne perform live with Black Sabbath for the last time ever, I would have told you you’re crazy. These guys still know how to rock!