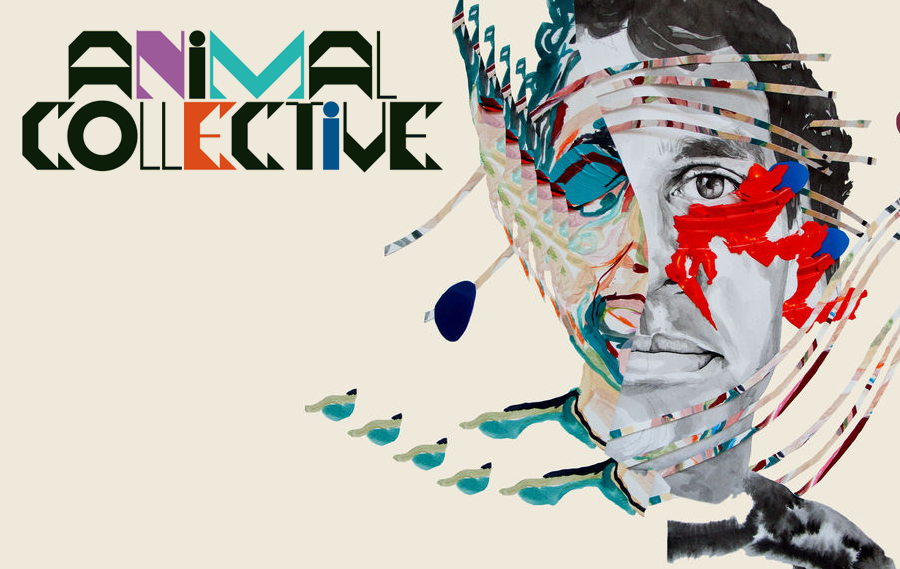 Since their universally acclaimed album Merriweather Post Pavilion came out in 2009, Animal Collective and its 4 members have continued to push and explore around their own sonic landscape without really missing a beat. With a mix of Psychedelia, electronic and Beach Boys influence on their sleeve, Animal Collective records have always been something to look forward to. After the success of MPP in 2009, the group released the sporadic Centipede Hz in 2012, but haven’t released a proper record since (until today that is). Panda Bear and Avey Tare have both enjoyed prominent solo careers, and Deakin made a shoe. Geologist has been well too.

The only thing that seems to remain constant in the band’s 17 year career is no two projects sound the same, and the tradition will continue with their 10th studio album Painting With. A Dadaist, Ramones-inspired record, Painting has the shortest running time of any AnCo LP. Looking back on the band’s evolution since 2009, recurring sounds and ideas underlie their constant penchant for change. Both Avey Tare’s Down There and Panda Bear’s Tomboy, released in 2010 and 2011 respectively, showcase the pop, drum-heavy and often ambient atmosphere of MPP. The underappreciated Down There is a darker, moodier release, one that is surprisingly restrained for Avey Tare’s brash vocal style. Tomboy is the most Beach Boys Noah Lennox will ever get, and also reveals the softer synth style that Lennox developed on his own.

By the time of Centipede Hz, samplers and synthesizers hold an even stronger role in the band’s sound. Drums, as well as Avey Tare’s voice, are maximally abrasive and bright on Centipede. Vocals continue to submerge further into reverb while percussion returns to a Strawberry Jam-level of live, dynamic energy. The distorted album cover, though incredibly silly, still captures the album’s mood well. It’s kaleidoscopic in nature, and the sharpest possible turn from the ambient and slow-changing. There are some patient moments, like the repeating riff of “Wide Eyes”, but these moments serve as interludes for explosive tracks like “Today’s Supernatural” and “Applesauce”.

In retrospect, the group seems to perform better when given a little more restriction. Much of the criticism levied against Centipede Hz concerned how crowded the tracks feel. The album plays like a radio-tuner stuck between frequencies; the grainy samples that bookend many tracks on Centipede sound like excerpts from alien cereal commercials. Toms and crashes conflict with a cacophony of reverberated synths to create an unfortunately muddy sound. With the relative simplicity of the band’s following releases, Centipede Hz will likely be the murkiest record the group ever makes.

In the time between Centipede and Painting With, another round of projects came from Avey and Panda, while Geologist took a personal break and Deakin worked on his troubled solo work. All members seemed to move back towards something simpler than Centipede Hz. Avey Tare’s Slasher Flicks released Enter the Slasher House, an album that, between campy horror screams and idiosyncratic Avey hooks, actually sounds like a rock band. The leading single “Little Fang” is a genuine pop moment, one that possibly speaks to a change in Avey Tare’s unpredictable songwriting style. Panda Bear Meets the Grim Reaper shows a tighter control over instrumentation, most notably the hip-hop inspired drums. Panda Bear creates just enough texture with a modest amount of pulsating, mid-range synth sounds. Tracks like “Crosswords” and “Principe Real” are what Panda Bear excels at: catchy soundscapes just interesting enough to couch his angelic vocals. It’s crazy to think that this whole venture started out as a very drone-heavy project between only Tare and Lennox on their first album, 1999’s Spirit They’re Gone, Spirit They’ve Vanished, and evolved into the experimental, much brighter 4 piece we know today.

That brings us around to Painting With and its two released tracks, “Floridada” and “Lying in the Grass”. Deakin is again absent from the production of this album, but is scheduled to release his solo work soon. The, uh, let’s say “unsurprising” music video (above) hints at the overall mood of the project. Where most Animal Collective music videos usually involve some live-action, “Floridada” is entirely computer generated, and also insanely vibrant. Unlike previous releases, Painting With seems to have a distinct lack of reverb, and a generally cleaner sound. Drums are punchy and tight, bringing out a recognizably AnCo catchiness. The group has found a smaller, more tasteful role for the busy flaring synths that occupied too much of Centipede Hz. The synth foundation is nice and steady, and even fades out during the verses. Although still intricate and detailed, “Lying in the Grass” returns to a kind of instrumental simplicity characteristic of Grim Reaper. It opens with a dry Panda Bear chorus, one that mimics the call-and-response of “Boys Latin” from Grim Reaper. It’s lackadaisical and even a little jazzy, alternating a simple verse and chorus for the three minute duration.

The most striking thing about these songs, especially the second single, is the kind of plain repetition that feels new for the band. There are no large buildups and no extended meltdowns, nothing approaching the two-chord bliss of “My Girls”. At the same time, it’s not frantic and wild, and even Avey Tare’s “flori-flori-flori-flori” chorus is relatively tame compared to, say, “Chores” from Strawberry Jam. Even though these tracks reveal a carefree simplicity to Painting With, it’s clear that the band is still as thoughtfully weird as they’ve always been. Animal Collective has never not surprised, never not delivered something that subverts expectations. Over their long history, the band has become more and more accessible, but the issue isn’t about pop v. “difficult”. It’s the confidence of trying new things that keeps people interested, and any longtime fan will go into Painting With expecting the same old thing: something completely different.

Painting With comes out today, February 19th, on Domino Records.