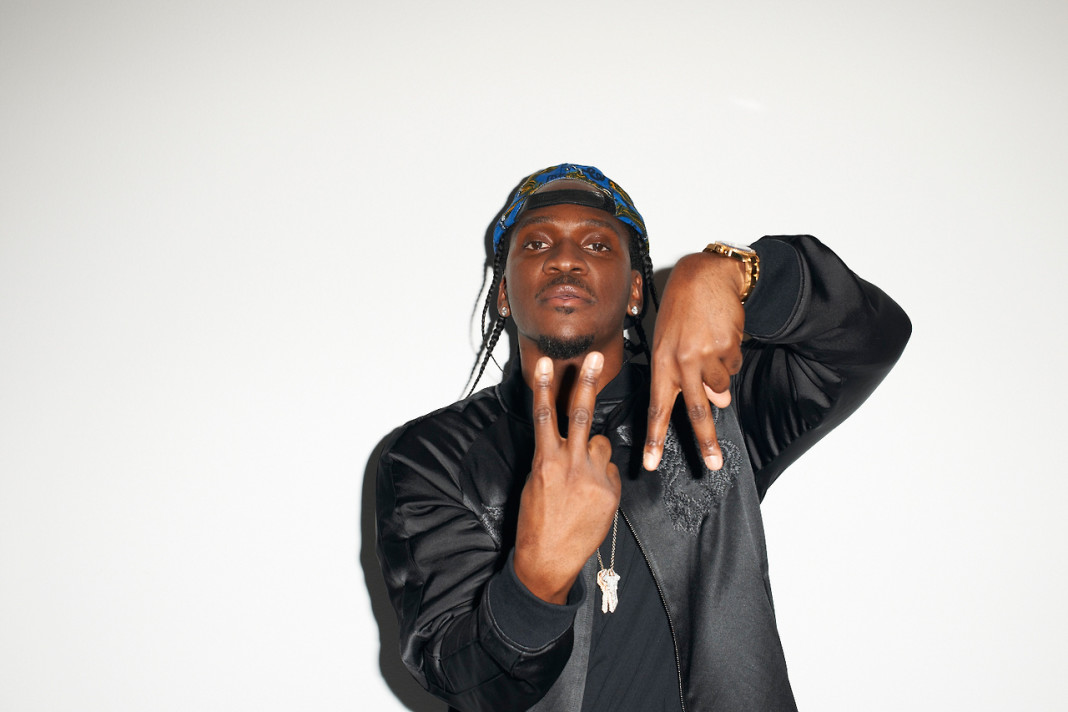 Pusha T’s Darkest Before Dawn, a prelude mixtape to his second album King Push, dropped yesterday and it’s full of the intricate and blistering raps you expect from Pusha as well as features from Kanye West, A$AP Rocky, The Dream, and more, as well as a powerhouse list of producers. We touched on the first single, “Untouchable”, on the last episode of The Weekly Rap Up, and in that time Pusha has released 2 more dark songs to promote the album, as well as a short film, which you can watch here. The Dream assisted “M.F.T.R. (More Famous than Rich)” sees Pusha lamenting on the blessing and the curse that comes with being famous, and “Crutches, Crosses, Caskets” has Pusha rapping over a minimal soul sample and gurgling bass line produced by Diddy and The Hitmen. As part of the album’s rollout, Pusha also performed album closer “Sunshine (feat. Jill Scott)” on the Daily Show, and is going on tour, with a stop in Dallas on 3/14/2016 at South Side Music Hall. Listen to “Crutches, Crosses, Caskets” below and purchase/listen to Darkest Before Dawn on your music platform of choice.

On December 12th, Chance the Rapper became the first ever independent artist to perform on SNL, and one of the handful of hip-hop artist to grace the stage in its 41 season run. Chance has been having a great year, doing a lot for the city of Chicago and finally teasing his upcoming third mixtape. Whether or not the (kinda) newly debuted “Somewhere in Paradise”, featuring fellow Chicago denizens and R&B superstars Jeremih & R. Kelly, will end up on the third mixtape has yet to be seen, but you can watch Chance perform the song on SNL here, with a surprise appearance from Jeremih, as well as a beautiful piano-driven rendition of Surf cut “Sunday Candy”. Chance also uploaded “Somewhere in Paradise” to Souncloud, which you can listen to below.

Fetty Wap had an insane 2015, and he decided to dedicate a surprise mixtape to the people who made it that way for him. The For My Fans EP was released earlier this month and features 5 songs of Fetty being Fetty over some recognizable instrumentals. Check out the first track “Ferrari Music Freestyle (feat. House Party)” below. You can also listen to Fetty’s newest track, the Zaytoven produced “Handgun” here. 2016 will most likely be a continuation of all things 1738.

English rapper Little Simz took 2015 to show everyone that she was one of the most intelligent and talented up-and-comers in music today, culminating in her fantastic debut album, A Curious Tale of Trials + Persons. One of the projects highlights, “Gratitude (feat. The Hics)” recently got a politically charged music video set in South Africa beautifully shot by director Jeremy Cole. You can watch the visually striking video below, and check out A Curious Tale of Trials + Persons for more Little Simz.

A$AP Ferg is gearing up for the release of his forth-coming second album, and he’s released his first new song since 2014, and the death of his longtime friend and leader of the A$AP Mob, A$AP Yams. In “Tatted Angel”, Ferg bares his soul and speaks about the difficult time after the death of a close friend. Check out “Tatted Angel” below. A$AP Ferg also debuted a new song with Future on Ebro of Hot 97’s Beats 1 show. Listen to the spastic and abrasive “New Level” here.

Wiki of New York rap group Ratking has released his debut solo album Lil Me, and it distills everything great about the NY rapper in one complete package. The mixtape features fellow Ratking members Sporting Life and Hak, as well as the likes of Madlib, Skepta, and Kaytranada. The 17 track mixtape showcase Wiki’s dexterous flow and unique ear for beats. Listen to”Gob Bless Me (feat. Sporting Life & Skepta) below, and check out the rest of the tape on Soundcloud.

J Cole and the rappers on his Dreamville label have released a followup to their Revenge of the Dreamers mixtape from 2014. Revenge of the Dreamers II see J Cole, Baz, Cozz, and Omen all work together to give J Cole fans exactly what they want, other than new J Cole solo work of course. You can purchase the album on iTunes and listen to lead single “Folger’s Crystals” below, with a surprisingly blistering verse from J Cole which then un-surprisingly devolves into a bad J Cole hook and some crooning. It’s not a J Cole song (or a Childish Gambino song for that matter) without crooning.

You might know Taylor Bennett from his music, his Instagram where he posts pictures of him with famous people, or you might know him as Chance The Rapper’s brother. Whichever way you know him, the young up-and-comer has been making a name for himself this year and it’s all culminated in his debut project, Broad Shoulders. Well, he probably has had some other projects before, but they’re not showing up on my Google search. Regardless, listen to the whole tape on Soundcloud and peep the album opener, “Happy Place (feat. Brill)” below.

Wiz Khalifa is known for being prolific, and after a couple of mixtape announcements, Wiz seems to be delivering on his promises. Cabin Fever 3 is the latest release in the Cabin Fever series and features appearances from Juicy J, Kevin Gates, Curren$y, and 2 Chainz, among many others. Listen to “Respect (feat. Juicy J & K Camp)” below, and bask in the glory of Juicy J continuing his streak of atrocious verses along with Wiz bringing his F game. I’m not here to tell anyone what to think though. You can also listen to and download the full mixtape on Mr. Khalifa’s Soundcloud.

I don’t know if people are still reading at this point but that Wiz Khalifa track was soooo bad. Jesus. Also, did you know Lil Durk has 1.4 MILLION Twitter followers? That’s insane. Is he that famous? I’m not even gonna check how many of those are fake because I don’t care that much, good for him. Regardless, Durk released his debut album Remember My Name in June, and he’s decided to double dip and release a follow-up mixtape entitled 300 Days, 300 Nights, for his fans. The mixtape features, amongst other tracks, Durk’s celebrated collaboration with girlfriend and fellow rapper Dej Loaf, “My Beyoncé”, which is a great track name. That song got best new track on Pitchfork. 1.4M followers and BNT on P4K, I had no idea Lil Durk had such an extensive resume… I need to get my life together.. Listen to the track below, and download 300 Days, 300 Nights on your mixtape downloading platform of choice. Doesn’t matter, they’re all riddled with ads, pop-ups and terrible design.

The way that the Migos have sustained their fame is insane. Don’t even lie and say you didn’t think they were gonna be one-hit wonders. “Versace” was massive and most artists that get a Drake remix end up being one-hit wonders. Yet, after hit, after hit, after hit, it seems like the Atlanta trio is here to stay. However, all that fame seemed like it would come to an end when 1/3rd of the group, Offset, was arrested in a police raid on the Migos’ vehicles that found weed, lean, and guns, resulting in a 6 month sentence for Offset. After half a year, Offset is finally free, and to celebrate he released “1st Day Out” on Soundcloud, which starts out with the bars “Got out of jail… again”, which is just a dope way to start a song. Migos also have an upcoming mixtape with Young Thug, and a collaboration between these two powerhouses can only be quality. Listen to “1st Day Out” and the MigosThuggin teaser track, “Crime Stoppers (feat. Skippa Da Flippa)” below. MigosThuggin arrives on Christmas, which proves that Young Thug is Santa Claus.

And finally, The Weekly Rap Up loves to showcase the music of up-and-comers. We’ll skip the descriptions this time around and let you listen for yourself. We’ll see you at the end of the month. Take care.