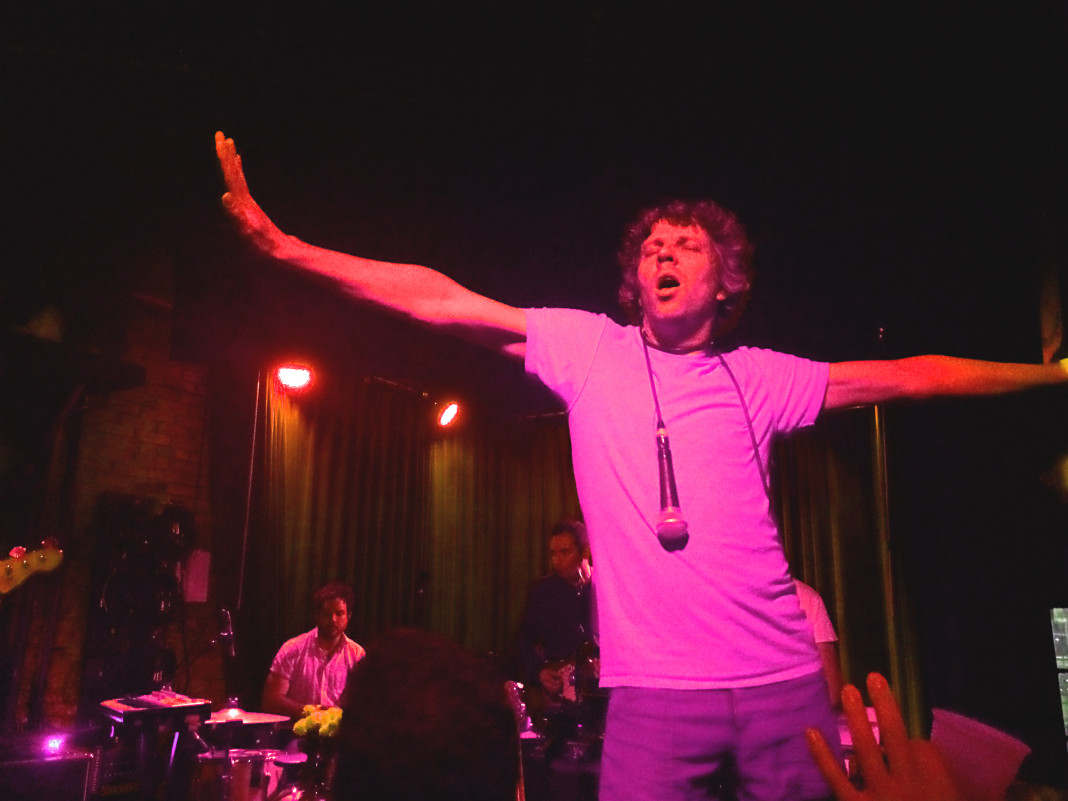 A healthy dose of Deep Ellum’s night life occupied Club Dada on 12/11. The unseasonably temperate Saturday for December geared up to be a solid one as more people trickled in and stood around waiting. The band Pageantry had just finished their set and exited the stage, blending into the rest of the crowd. Most people milked their beers as long as they could waiting for the eventual set up of !!!.

Once that finally happened, familiar faces from the Sacramento band assumed the stage, arranging their guitars and synths to appropriate places. Lead man Nic Offer in his longish, frizzed out hair and light-blue, plaid dress, with an embroidered flower, helped set up. He grabbed the mic and introduced the band in an accent which we all assumed to be a french maid. “Bonjour. We are the band, Stereo-lad. Here’s our song, and we hope you enjoy.”

The kick drum did indeed say Stereolad, and of course this was consistent with the bill. The alt-rock and simple rhythms of familiar Stereolab songs buzzed through. Many looked confused, but this was all but an accident. !!! consciously wanted to open for themselves as their “side project”: Stereolad, a Stereolab tribute band. About 5 songs deep and Nic Offer approached the mic again with a, “Merci beaucoup. Chk Chk Chk is up next.”

10 minutes passed before the inevitable return of !!! with guest funk and soul singer for accompaniment. A brief introduction took place, immediately followed by the explosive thump of the track “Sick Ass Moon” over the sound system. Offer grooved in the usual manner: lots of pelvic thrusts and oscillating arms. The gentle ambient vocals escalated with the gradual rhythm of the synths and guitar. The kick deepened and Offer danced a little harder. The crowd was now in full swing, jumping up and down, jiving confidently and getting exactly what they came for. A solid followup from the song “All U Writers” couldn’t have been more impeccable in timing, dropping the sickest bass riff over a steady beat, and ultimately making most people work up a sweat.

That essentially summed up the attitude of !!! for the rest of the evening. But it’s not enough for the band to just dance really hard as they wail on their respective instruments, Offer swivel-hipping his way from one side of the stage and back, or the guest vocalist absolutely nailing her flared verses. No, they wanted 100% assurance that everyone got a chance to party, so Offer went ahead and danced his way into the crowd, with individuals 1-to-1, and even on top of large amplifiers in the back of the venue. Anyone with a camera had a lot to work with. Touring on their new album As If allowed for a lot of these moments, in fact, providing infections rhythms for ample gyration as well as times for straight jamming. These moments proved to be the best where dedicated attendees lost themselves in the motions. Frankly, I’m glad that’s how it panned out.

!!! ended the set with not one but two fan-favorites, “One Girl One Boy” and “Slyd.” Afterwards Offer reminded everyone of their after-party dance-DJ set at Beauty Bar. Whether he actually reminded them of this or everyone just found out, it worked, because Beauty Bar was just as much of a great time dancing and well attended as Club Dada.

A moderate yet realistic time lapse between venues gaped the sets. Nic Offer and one of the guitarists entered the bar and DJ Red Eye informed everyone. Behind the decks the two bandmates became illuminated by the glow of their Macbook. The disco-daze settled in with a quirky rhythm, no melody, but more than sufficient to maintain the energy of the dancing crowd. Offer bobbed elegantly with a smile to the beats as the guitarist mixed and blended the tracks. The dimly lit salon-by-day, club-by-night was nearly to capacity it seemed, sticky to walk on from multiple spilled and stepped on drinks and humid from perspiration. Excellent. It was at this time I made my exit, but I’m sure the good times kept rolling until close. Another year, !!! has graced Dallas with a night filled with dance and an excuse to cut loose. Until next time. 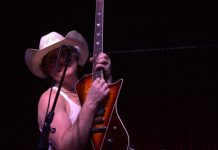