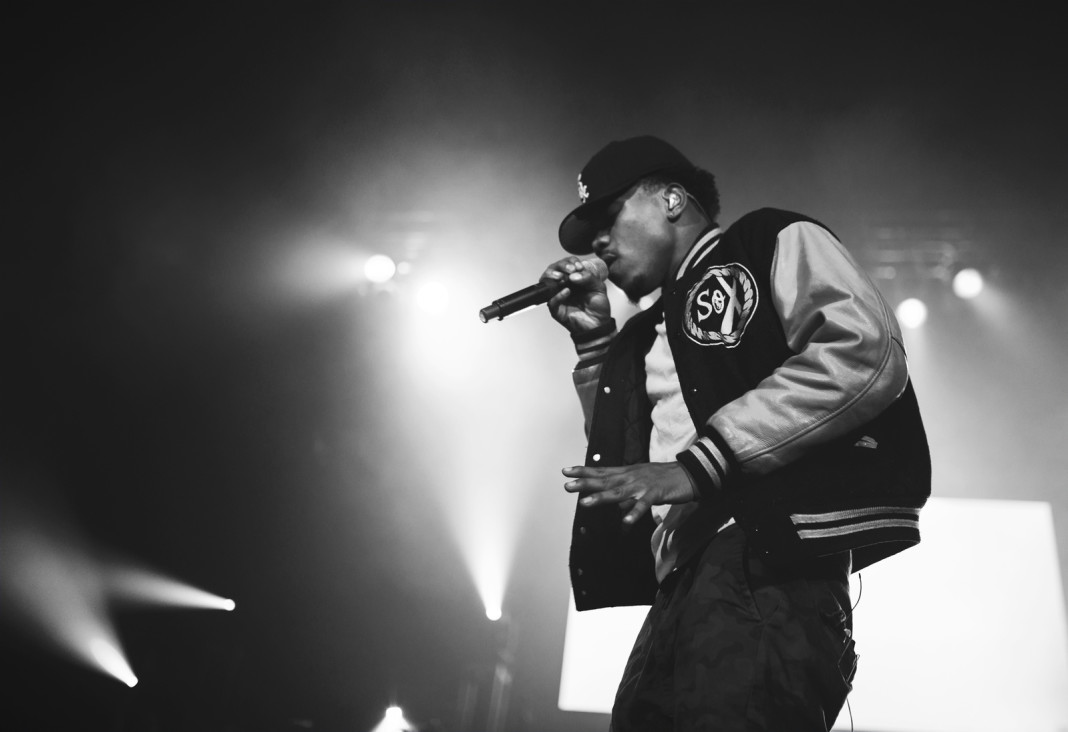 Welcome to The Weekly Rap Up! This edition, we’ve got a ton of news. New music by industry come-up’s, old legends returning to music, and lot’s more. Let’s get into it.

Though sometimes a reluctant star, Chance the Rapper occasionally drops in on the music world to give tidbits of info, but ever since October, he’s been teasing his third mixtape through new music and his social media accounts. We’ve gotten Surf, his album with The Social Experiment, and the Free (Based Styles Mixtape) with Lil B, but new solo material from Chance has been few and far between. “Israel (Sparring)” with Noname Gypsy a few months ago was a great treat, but we finally have a full track that sounds like it could be on Chance’s upcoming mixtape. Chance said his third mixtape was coming soon during a live cover of Kanye’s “Family Business” (of which a better quality version can be heard in a short video posted to his Youtube page) and he also tweeted that he was working on a song with Stephen Colbert. Later that week, Chance debuted “Angels” on the Late Show as Colbert sat as still as possible with a halo on his head. Dancers doing juke flips and footwork made for an energetic performance, which you can check out here, and listen to the full song below (as well as download it on iTunes for free).

The Social Experiment also released a Halloween MegaMix, featuring Chance and the band performing their traditional juke stylings over samples of old horror shows and movies like The Twilight Zone and Ghostbusters. Alex Wiley also dropped a track called “Navigator Truck” off his upcoming Village Party 2 project featuring Chance. Listen to that below as well.

Ty Dolla $ign released his debut album Free TC on Friday the 13th, going up against heavyweights like Justin Bieber, One Direction, and Logic who released albums on the same day. (well maybe not the last one). After a slew of mixtapes, the multi-talented rapper/singer and producer promised this to be his best and most polished project yet, and from the sound of it, he wasn’t lying. Dolla $ign has gained a large following with a slew of mixtape releases, features, and production credits on hit songs. Since his hit single “Or Nah (Remix) [feat. Wiz Khalifa, The Weeknd & DJ Mustard]” on The Beach House EP in 2011, he’s been making hits again and again, and Free TC has no shortage, with half the songs being released on Soundcloud and a couple being huge hits, most notably “Blasé (feat. Rae Sremmurd & Future) which we covered in October’s Weekly Rap Up. You can stream the album on Spotify and listen to the first track “LA (feat. Kendrick Lamar, Brandy & James Fauntleroy)” below for a dose of west coast sound mixed with dramatic strings and maximalist vocal arrangements.

As Kid Cudi gears up for the release of his new album Speedin’ Bullet 2 Heaven on December 4th, he’s rolling out new music and a new tour to go along with the album as well. It’s a double album, with Side A being the album and Side B featuring demos, bonus tracks, and other unreleased or unfinished material. Cudi released a slew of songs on his Soundcloud this year, one of which, Confused, is the lead single from the album. Cudi also revealed the tracklist to the album on his Twitter, whilst also announcing a tour that starts at the end of the month. He’ll be in Dallas on December 17th at The Bomb Factory, and we’re sure you’ll see Radio UTD there as well. Check out the tracklist and the Ratatat sampling track “love.”, which won’t be on the album, but is honestly better than all the music released that will be, below.

“Speedin’ Bullet 2 Heaven” Side A pic.twitter.com/di7RnlG8Vh

Pusha T was recently appointed as president of G.O.O.D Music, and released a new Timbaland produced track “Untouchable” whilst teasing his upcoming album King Push, the follow up to 2013’s excellent My Name Is My Name. There’s no concrete info on the name of the album or its release date, but Pusha has said in an interview with Complex that the album will feature production by “Puffy, Hudson Mohawke, Kanye West, and Timbo” and has revealed some possible song names and collaborations. After the release of a remix of Meek Mill & Drake’s R.I.C.O., and his new “Black Market” sneaker collaboration with Adidas, the former rapper of brother duo Clipse seems to be gearing up for his rawest and most polished album yet. Michael B. Jordan is starring in Creed, a sequel to the Rocky series of films, where-in Apollo Creed’s son is trained by an aging Rocky Balboa, played by Sylvester Stallone, reprising his role for the first time since 2006’s Rocky VI. The soundtrack is packed with original music, and Future has his own Metro Boomin produced song on the album. “Last Breath” samples the Rocky theme song and features Future singing inspiring bars like “I just wanna be the champ for the misfits/And the ones that would say I couldn’t do it.” Listen below. There’s also apparently a Vince Staples and Childish Gambino collaboration on the album, and it’s being put forward for award season consideration. Vince Staples and Donald Glover with an Oscar nomination? Juicy J has one, so anything can happen.

In more gossipy news, Metro Boomin set off a series of tweets that started a beef with long-time friend and collaborator Young Thug.

Everyday I wake up, new mixtapes are falling out of the sky.. I think we all know where the trend came from lol ?☕️ pic.twitter.com/dytHN7fubs — Metro Boomin (@MetroBoomin) November 9, 2015

And then Young Thug responded… And even Future got involved.

Hey @MetroBoomin who u referring to ????

You can see the full exchange here, but it seems as if the beef has been squashed. Originally the beef was thought to be a publicity stunt, but Thug and Metro have confirmed it was a misunderstanding between friends and they’re back to their good ol’ ways. As proof, check out their newly dropped collaboration below, and download Thugger’s new Slime Season 2 mixtape here.

Missy Elliott has been teasing her comeback to music ever since last year’s Superbowl where she guest starred on Katy Perry’s halftime show set. The visibility was so good that digital sales of her music jumped up 25% and Elliot was inspired to get back into music. She said she was working on her new album, Block Party, with Timbaland, and we finally have evidence that a new Missy Elliott album could be coming very soon. The new track “WTF (Where They From)” features production and vocals from Pharrell and brings back that old flair that only Missy can do to the forefront. Check out the video below.

Diddy also dropped a new music video to promote his comeback album No Way Out 2, and the single samples Les Sins’ (AKA Toro Y Moi’s) 2014 track “Bother“. You can check out the music video here and listen to the full version, which features Travis Scott and Big Sean, below.

Freddie Gibbs releasing his new album Shadow of a Doubt on November 20, and has shared two new songs from the project on his Soundcloud. Last month, Gibbs shared the video for “Fuckin’ Up The Count” and now his new tracks “Extradite” with Black Thought and “Packages” with ManMan Savage bring more grimy flows and storytelling, and gritty soul-sampling production to the table. Listen to both tracks below.

With the 25th anniversary of A Tribe Called Quest’s first album, People’s Instinctive Travels and Paths of Rhythm, an excellent reissue of the album has been released on Legacy and the Tribe went on Fallon to perform “Can I Kick It” for old times sakes. Not wanting to be left out of the fun, and to honor the legendary pioneers, J Cole also dropped a remix of “Can I Kick It”, albeit with production far more atmospheric and spacey than the original. It’s a really nice take on the song, and Cole’s production doesn’t overshadow Phife and Q-Tip. There’s no verse from him either, which shows how much he respects the group. Cole’s love for ATCQ is well documented, as he sampled “Electronic Relaxation” for the song “Forbidden Fruit” on his 2013 album Born Sinner. Check out the remix below.

Yung Lean has also been teasing his upcoming album, as 2015 has seen him drop 3 new songs, the first 2 being “Crystal Clear Ice” and “How You Like Me Now? (feat. ThaiBoy Digital)”. Now, Yung Lean drops his most refined and darkest song yet in the form of Hoover. Check it out below.

To wrap it up, let’s have a news blast.

And finally, some new music from artists just waiting to break through. Trap recently released his new Black Beverly Hills EP and “Trapo” is one of the finest tracks from the project. BLACK PARTY is another up-and-comer, and in his new song “You” deviates from his rapping for one of the most refined songs from a developing song artist we’ve heard all year. The aforementioned DP also has an excellent track on the same mixtape, Designer Casket, called Jabar, and it’s perfect night-riding music. The new single from Donovan Day is pretty great as well, featuring spastic but smooth production and a feature from Christen Cappello to round things off. Even smoother than that is Dave B’s new track that features an excellent 2nd verse and chill production. And finally, much like BLACK PARTY, Daye Jack’s new single also features some R&B stylings, but with the added raps we know Daye Jack for. Check these guys out and support their music!


That’s it for this segment of The Weekly Rap Up. We’ll see y’all at the end of the month to finish things off, and then December will be upon us and we’ll look at the best releases from the year and see what we can look forward to in 2016. See y’all next time!