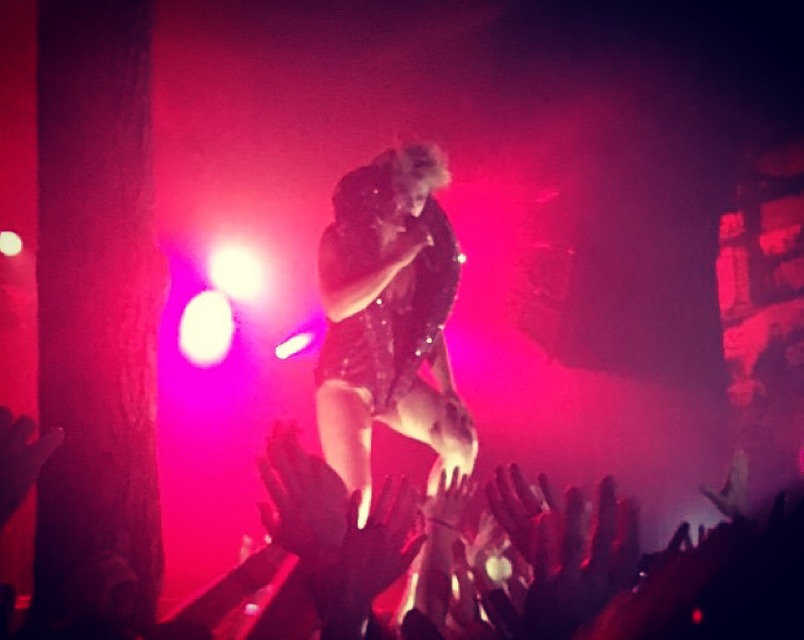 In a recent piece for Out magazine, the actress Ellen Page described Peaches as a performer who “gives all of herself to her audience.” After Saturday night’s fiery showcase at Trees, it’s hard to disagree.

Since 2000, Peaches has blended sex-positivity and queer politics with raw electro beats. She has remained consciously undeviating from blurring gender norms, stirring candid dialogue while others seal their lips. This is perhaps why although she had not performed in Dallas since 2009, a sizable crowd of interest turned out –– anticipation bubbling. That excitement was somewhat tempered by a seemingly endless DJ set prior to opener Christeene taking the stage. A self-described “drag terrorist” from Austin, Christeene (aka performance artist Paul Soileau) impressed the crowd with his blend of ferocious beats and raunchy rhymes (not to mention those assless chaps). The closest parallel I can think of would be Beetlejuice performing “Dirrty”-era Christina Aguilera tracks.

His songs were interspersed with warped monologues, usually involving sexuality. “There’s something that all of us have in common”, Christeene mused in between tracks, before thrusting his butt out and pointing inside. If John Waters remade the local Top 40 station in his image, it would look something like Christeene’s set. The iconoclastic set more than prepared the audience for the main act. Peaches arrived to rapturous applause. It was the kind you’d imagine David Bowie received during his Ziggy Stardust tour. If the booming bass hadn’t immediately pummeled you into submission (always bring earplugs, kids!), her commanding vocals during “Rub” kept all eyes on her.

Peaches’ setlist focused primarily on her new LP “Rub”, which is influenced by bass-heavy 2010s hip-hop, as well as the more spartan “808s and a microphone” setup on her debut. This new material blended surprisingly well with her older tracks. For example, the rave vibes of 2009’s “I Feel Cream” and “Mommy Complex” felt natural next to the kinetic beats of “How You Like My Cut?”. The crowd had small pockets of head-bangers and booty-shakers, but mostly consisted of folks standing still and clutching their Coors. Despite the initial lack of audience engagement, her two backup dancers were hugely important to keeping the energy up. Tracks that felt flat on the record (“Pickles”, “Close Up”) came alive with their choreography. Their outfits also rivaled those of even Peaches herself! The dynamic duo dressed as everything from walking vaginas (during “Vaginnoplasty”) to health goth athletes (“Boys Wanna Be Her”). There were enough costume changes to match a stocked wardrobe found backstage at a Madonna concert. Of course, Peaches is working on an entirely different playing field than any Top 40 act. The giant condom that unfurled across the room during “Dick in the Air” says about as much. Fortunately, even the most stoic partygoers lit up once “Fuckthe Pain Away” began. The iconic call to hedonism transformed Trees into the sweaty dance party it should’ve been all night. Halfway through the track, Peaches took a swig from a bottle of liquor and spit all over the front row. On paper that might sound unappealing, but the audience ate up the sheer punk attitude of it.

After this burst of energy, the crowd had finally livened up. Her final song of the night, the Giorgio Moroder-esque “Light in Places”, summed up why the show worked as a whole. “I’ve got light in places you didn’t know it could shine”, she soothingly disclosed, at which point LED lights on the backup dancers’ crotches lit up like the 4th of July. Her campy celebration of physical pleasure is just as exciting and necessary now as it was 15 years ago. Last night’s audience learned that, one electro jam at a time.