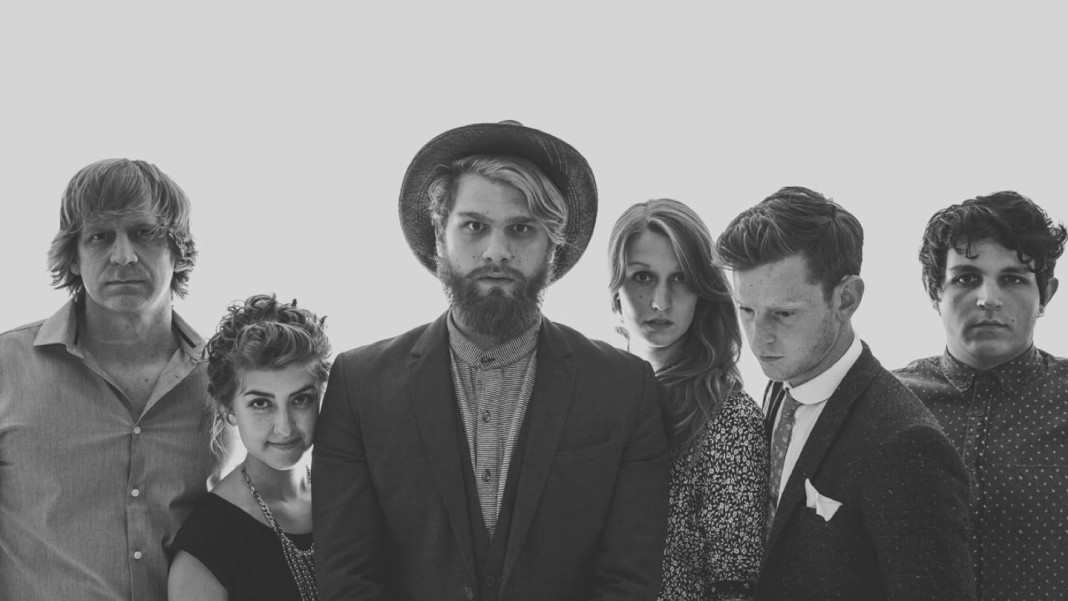 The Last Bison are the definition of Folkeastra, the genre title given to bands who use traditional, acoustic instrumentation to achieve a full sound with classical sensibilities. Listening to their most popular song, “Switzerland,” off of their debut LP, Inheritance, one gets the sense of wandering the mountains of Europe in the darkness of a winter night, following the band as they tell the true story of a camping trip gone awry. They saw success in the Northeast in 2012 with their first release. Since then, the band has undergone several changes: they switched from classical Victorian garments to more modern clothing; they reigned in some of their characteristic wandering sounds; and, most recently, two of the remaining six original members left to pursue different life paths. Nonetheless, their music remains as evocative as ever.

Before their show at the House of Blues on Friday, I interviewed the lead singer, Ben Hardesty, who formed the band from a group of family and friends.

Radio UTD: Your last release was Dorado and then before that you had VA. You released those both independently whereas with your first couple released you did with a label. What was that experience like going to an independent way of recording things and releasing things?

Ben Hardesty: We started out independent, actually. Our first record was independent and so when we signed with a label that was kind of a new experience. We were flown into LA and did this big budget record. So going back to VA and Dorado and doing them independently again was kind of going back to where we started so it was familiar and felt safe.

Radio UTD: And you guys also changed your look when you went through that change. So what was that like?

Ben Hardesty: I mean, it was less sweaty. It’s hard to breathe when you’re wearing an ascot on stage. We were fully steeped in this Victorian aesthetic. I convinced everyone to do it because I thought it fit with the era and they decided to do it with me. It was kind of this branding. It wasn’t out of anything fake or contrived. It was from a real love for the look and the history of our country and a branding. But with the new music and the way it was going, it felt like the aesthetic was in a new direction. So we switched it up. It was just like we would; just to have some fun.

Radio UTD: I think both looks are really good. I like y’all regardless. You guys also recently went through a change when you lost Teresa and Dan. And I say “lost” and that sounds terrible. That was sad for us to see them go. How has it been playing without them and with your new members?

Ben Hardesty: It’s been really good. We had a flow going after playing with the same musicians for four and a half years, so I was a little anxious about what it was going to be like. It was a lot more encouraging than I think I expected the first time we got in the practice space with the new guys. There was just a real familial and friendly chemistry, spirit of creativity. It’s been really, really good, surprisingly.

Radio UTD: I hear that congratulations are in order for you. You recently got engaged.

Ben Hardesty: I did indeed. I’m wildly excited. It’s hard to be on the road and be newly engaged because I don’t have any care to be on the road. I just want to be there. So I’m trying to balance the two of them and learning how to do that.

Radio UTD: Well that’s exactly what I was going to ask. How do you guys balance that?

Ben Hardesty: We were long distance for four and a half years before we got engaged, so we’re used to that. But now I feel like it sucks more. I’d rather have been like, “Sorry guys, got engaged. Cancelling the tour.”

Radio UTD: So are there any new projects in the works for you guys that you can talk about?

Radio UTD: Are you guys going to go back to the Wigwam?

Ben Hardesty: I’m not sure yet. I really don’t know. It’s all up in the air.

Ben Hardesty: Yeah, I am too. I have no idea. Who knows what it’s going to be like. We will see.

Radio UTD: Do you guys have any good stories from the road?

Ben Hardesty: So we’re on the road in September, ok? And we’re opening for this guy named JJ Grey and Mofro – blues legend, awesome songs, really funky. So he’s playing this event in Sea Island, which is a resort in Georgia. Only hotel in the world to receive a five-star rating seven years in a row. And we have to play at this hotel and you know, for us, we’re used to driving around in this fifteen-passenger van, sleeping on friends’ floors, eating fast food. That’s our life. But for a night, we drive onto this island and immediately, six-person golf carts everywhere. The green room is in this marble room with tapestries and art. We got escorts everywhere and at the end of the night, this couple bought us $30 cocktails all night. We were being pampered in a way that I didn’t even know existed, feeling like the 1% for a brief moment.

At the end of the night, our drummer goes up to the bellhop and he’s like, “Hey, we were in the first band. We’re really sweaty and we have to drive five hours even though it’s midnight back to Georgia to sleep on our friend’s floor. Reality’s about to sink in big time. Can we get some showers?” And the lady was like, “Well, all of our public shower facilities are closed right now. Let me make a call.” About thirty seconds later, she comes back out and says, “Ok, we’re going to open up the tennis courts for you guys.” And we’re like, “Ok…” She says, “Just go back out front and there will be an escort.

We hop back in the escort and this guy takes us to these tennis courts and this sunken garden and this full tile, Roman-style entryway into a men’s and a women’s section. When we walk in, there’s fresh-pressed towels and we each – we took turns because there were three different stalls that were ten foot by ten foot tile. Now this is the best part: on the wall they had the different glass pumps with your shampoo, your conditioner, your soap. And then in front of you is a dial and you can turn the shower on to whatever exact temperature you wanted it to be. We haven’t stopped talking about that night. I can’t explain to you how dream-like it was because it was so out of the ordinary. But that was our favorite thing.

When we drove into the place, for some reason they had six random world leaders’ heads. Not even just great ones, but, like, Vladimir Putin and some other dictator and then George Bush – it was just random. It was just, what are these guys? Apparently it was for some scavenger hunt for some huge company. Anyways, though, one of the ladies who was in the scavenger hunt was like, “Yeah, they just needed them for that. Nobody’s using them anymore.” We were like, no way. We’re going to steal Vladimir Putin. It’s like a six-foot cutout head of Vladimir Putin. We’re like, we’re going to get Putin and we’re going to throw him in our trailer and it’s going to be awesome. So we’re leaving at 12:30 at night – this is going to be the most disappointing part of the story. We get out to the field and we’re walking over to get them and they were all gone. It was the worst. Like, our guts just dropped. We were like, we could have had a six-foot Putin head. But we couldn’t. It didn’t happen. The stars didn’t align. But it was a fun night.

Radio UTD: How has this tour been so far? Y’all have been going around for the past few weeks with Green River Ordinance.

Radio UTD: Looking at the types of venues that you play closer to Virginia and then out here, like in Dallas – last time you were here in Dallas you were at the Prophet, which is pretty small –

Ben Hardesty: Yeah, that’s probably like where we would play on our own but playing with them, we’ve gotten to play in some bigger crowds and places that we don’t draw as well, so that’s really nice. Tonight, I think, especially, because we’re playing House of Blues and they have a draw that should be over a thousand people for tonight and that will be nice. We can do that at home, but that’s really the only place we can pull those numbers. Everywhere else we pull 350 people and so to play for a crowd like that will be really nice.

Radio UTD: So what’s it like to go from playing for a thousand people in Virginia – headlining a show like that – and then coming out here to play these smaller shows?

Ben Hardesty: It’s fine. I mean, we understand it. At home, you have your home base. We did really well early on at home, so now we can play the premier venue at home and bring out over a thousand people. But elsewhere it just doesn’t click the same because it’s not your home base, so you really don’t work it longer, harder. You know, at home, when you’re a starting band, you’re playing shows every month. You’re playing a few shows at home, doing whatever you can, but you can’t do that everywhere.

Radio UTD: Anything else you guys got going

Ben Hardesty: That’s about it. We’re really excited this year for the first time in three years, we’re not touring in December, so we really get to enjoy the Christmas season, which all of us love a lot. We love the music and the food, so we’re actually going to be able to soak that in this year.