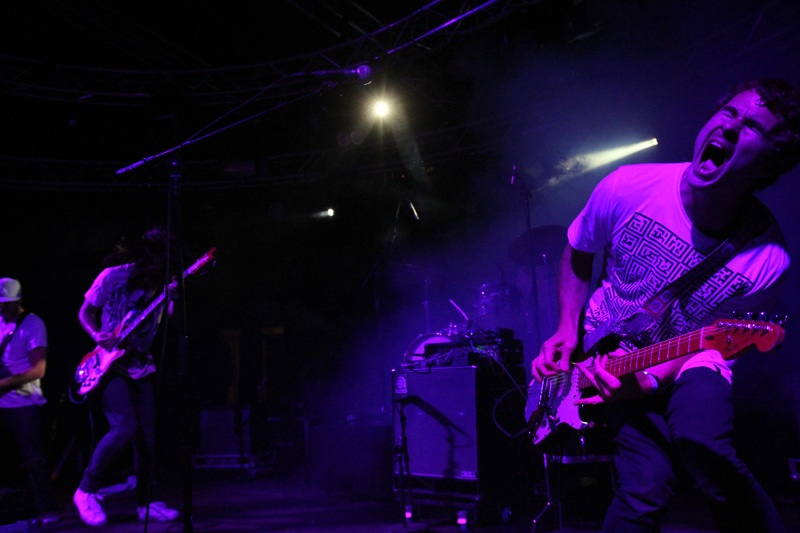 I had never seen HEALTH before last night, and prior to last night I had only heard legends and anecdotes of the talent of HEALTH. I was pumped to say the least. Upon entering Trees, I immediately went to the outside section to be greeted by my old friend, the elotes stand. You never know what you’re going to expect at a Parade of Flesh show, but it’s going to be a good time, especially when you start the night off with some Mexican street corn. After indulging my gluttony, I was ready to make moves back inside and wait until Pictureplane came on. Thanks to my impeccable time management (cc: potential employers), I only waited 5 minutes for Pictureplane. The curtains opened revealing a skinny man, dressed in what can only be described as “comfort punk”, standing behind a table of pedals, samplers, and a midi controller. Even though his music making might be constrained to this table, Pictureplane overcame the DJ’s dilemma and danced around stage while singing the songs off of his new album “Technomancer”. On top of all this, his performance included projections on a screen behind him, consisting of looped videos and pictures displaying high importance individuals showing oval pupils, sharp teeth, and in some instances, claws. This indicated that these people were some sort of reptilian humanoid hybrid, and basically you shouldn’t trust the media or the people in power, the Technomancer Manifesto. After Pictureplane finished his set the audience was readying themselves for what was to come, HEALTH. Everyone started to inch their way closer to stage, or went to go refill their drinks. When they finally came on, they quickly energized the crowd by playing their older noise rock songs, like “Crimewave”. Although, since this tour was in support of their newer more industrial-pop album, Death Magic, the majority of the songs played were off of this album. And since this new album is different from their older noise rock stuff, no mosh pit ensued. It’s not that the audience wasn’t unresponsive to HEALTH, they just preferred to dance in their own space. And it was hard not to dance when HEALTH themselves were dancing so much; the bassist was the focal point for me, as his long black hair hypnotized every time he started head banging (think a metal version of Willow Smith in “Whip My Hair”). When “New Coke” stared, the audience went wild, head banging, couples started making out, and everyone was having a great time. When HEALTH finished, the audience immediately demanded and encore which they delivered in the form of one minute noise rock shred session. Overall, the experience was different from everything I had been told about HEALTH (I had only really been told how hard the mosh pit was), and that is not a bad thing it just means that HEALTH is growing as a band and I can’t wait to see what they bring to the stage the next time they come to Dallas.