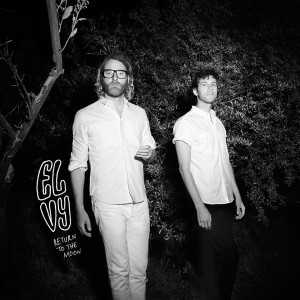 After touring extensively for a year and a half behind Trouble Will Find Me, the last thing you’d expect from Matt Berninger, lead singer of The National, is see him embark on a new project but that’s exactly what he is doing. EL VY (rhymes with “hell pie”) is the collaboration between The National’s Matt Berninger and Menomena’s Brent Knopf. However, just because this is a side project don’t expect these songs to simply be National leftover b-sides. The duo met years ago, when they toured together in their respective bands, since then the two have kept in touch, mainly via e-mail, sending one another would be song bits. It wasn’t until last November when the two finally got together in the studio, and well the rest is now history.

The title track, which received an endorsement from none other than Taylor Swift on her Instagram page, sets precedent for what we are to expect on the rest of the album. With its afrobeat-lite sound and rollicking guitar intro, it’s easy to mistake it for a Talking Heads track. While its upbeat tempo might differ from what we are used to hearing from Berninger, make no mistake, the dark and esoteric lyrics we are used to are still present throughout as he casually sings during the chorus “I’m dying” repeatedly. The title track sees Matt exploring the range of his naturally baritone voice to a note higher than we’ve ever heard of him in any of the The National’s six studio albums.

On the second track, “I’m The Man to Be” we see Matt experimenting with his voice once more, in this instance he is drunkenly speak-singing, which according to Berninger, the song is written from the “perspective of a pathetic self-aggrandizing rocker alone in a hotel room”. Given the title of the track, one can assume that Berninger is poking fun at himself and the sleazy attitude one is to expect from a “rocker”. This leads to some of the more irony-dripped memorable lines of the album such as “I’m peaceful cause my dick is in sunlight” and “I’ll be the one in the lobby in the collared fuck me shirt (the green one)”. “Paul Is Alive” and “Silent Ivy Hotel” are tracks that make the listener wonder if its release date of October 30th, the day before Halloween, was an intentional move as both tracks create a spooky and sinister atmosphere. The latter track has Berninger sounding like a combination of Tom Waits and Nick Cave, while the former gives us an insight into some of his early influences such as Husker Du, and The Smiths.

One of the more downtempo songs off of the album, “It’s A Game”, is rather forgettable and predictable; an indiscernible indie-rock song in a CW teen drama, only to be set to a montage of the protagonists looking dramatically out the window because that was the only song the network was able to afford. The song is meant to conjure feelings of excitement about seeing the one they love (“it’s a game, I can’t wait to see you”)  but the lyrics and the delivery of those lines don’t concord with one another. The piano feels uninspired, only there to fill up the quiet between verses. “Need a Friend” although it features a more danceable tempo, sounds more suited for cabaret club rather than this album, or any album for that matter.

The album receives a special guest appearance from Ural Thomas, who with his soulful voice, helps brings some depth to the airy vocals in “Sleeping Light”. The closing track, “Careless” is the most National-esque sounding of the record, with its claustrophobic vocal execution but atmospherically spacious sound and somber lyrics. It sees Berninger hiding under spider webs building up the angst, only to have it culminate with Berninger repeating “It’s agony” over and over.

What this album does well is that it gives us some of the familiar sounds in a less morose package. The songs are catchy enough on their own right, however this album does not feel like a collaboration between two artists looking to express themselves outside of the sound they are accustomed to. Rather, this album feels like a small extension to a sound we are already familiar from both parties, its fodder to hold over until the next album from each respective party. While the record might be called “Return to The Moon” it feels more like we are just commencing to leave the atmosphere, but no doubt we’ll reach our final destination eventually.