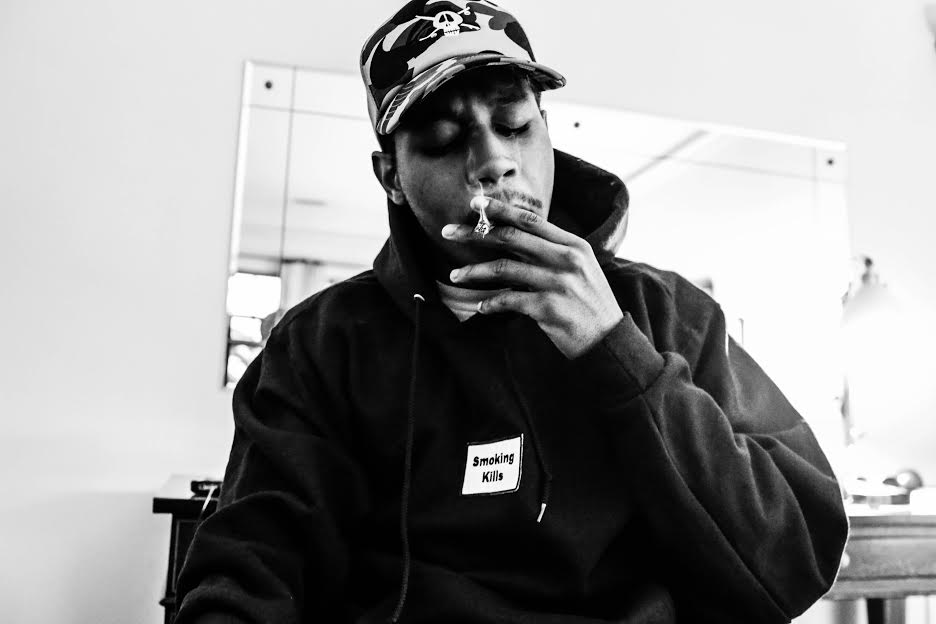 Cousin Stizz and his DJ, DJ Reef, sit on a low set teal couch in what essentially amounts to a trap house mixed with a frat house. In the front is a nondescript house occupied by a few members of the UTD chapter of Delta Tau Delta. An XboxOne accompanied by Mortal Kombat and Call of Duty, lots of cases of bottled water, a messy dinner table with textbooks placed alongside plates with unfinished hot pockets. In the back is just one large room leading to the backyard, unfurnished and undecorated, simply plain walls and a cracked concrete floor. This is where I first meet Cousin Stizz, a rapper from Boston who released his debut mixtape “Suffolk County” back in June to huge blog buzz. You may not have heard of the rapper himself, but you might have heard his most popular song and the first single from the mixtape “Shoutout”. The song began to gain traction when a video of Drake celebrating his birthday at Dave & Buster’s was posted to Instagram, and he was dancing to “Shoutout”. The rapper is also friend’s with the likes of Michael Christmas and even appears in his new video. He had been flown out to Texas by the fraternity to perform at the Delts of Hazzard celebration at the Green Elephant for the Delts of Hazzard party held by the organization, and he seemed genuinely excited. I sat down with Stizz after we both realized we enjoyed the same music when I jacked the Aux and played Mac DeMarco and Tame Impala. Stizz and his DJ even had the same favorite Dr. Dre song as me! (It’s “Let Me Ride” for the record).

Radio UTD: Stizz, Welcome to Dallas. We’re happy you’re performing for the students and living it up out in Texas.

Cousin Stizz: Thank you man, appreciate you for having us.

Radio UTD: I guess the first and most important question I have to ask is, how did you start rapping? What’s your origin story?

Cousin Stizz: I started rapping by freestyling with the homies, outside. I didn’t start rapping till mad late in life. It probably wasn’t even until like a couple years ago. It wasn’t even rapping really, I was just dissin’ my friends, I was like 18 or 19 doing that, you know? I didn’t fall into rap until way later into life.

Radio UTD: If it started out as roast sessions, then who did you link up with to really make the music? When did you decide that you could really do this for a living?

Cousin Stizz: I linked up with my gang, my squad! Michael Christmas, Tim, GoIn, OG… and I ended meeting this fool a little later down the line *points to DJ Reef*, but like, that’s who I like linked up with, and Christmas dropped his “Daily” joint, that shit boomed and kicked off, and that’s when I thought, “maybe I should take this shit seriously” instead of bullshittin. It was all fun and games at that point, we didn’t take rap seriously. We always talked about it, but I never thought I’d do it. But I knew I could if I really tried. It was all about the “really trying” part.

Radio UTD: So moving from how you started to your current music, what is your process in the studio? Do you have any rituals? Or anything you do before you write a verse?

Cousin Stizz: Usually my shit be, like if I’m going to write a verse, it’s done before I go into the studio. I don’t wanna waste time, and that’s just wasting time. I don’t have that luxury. Time is money as they say and it rings true. So, I usually go to the studio, already know what I’m doing, I bullshit with Roy for a while, talk shit and bounce around ideas, then I get high and I hit the studio. I hit the booth and then that’s it.

Radio UTD: So smoking is a ritual before going to the studio?

Cousin Stizz: I mean smoking’s just my ritual in general. Just a thing that I do often.
DJ Reef: It’s a lifestyle!

Radio UTD: So you’re from Boston, and just off the top of my head, the most famous rappers from Boston are like… Esoteric.. That’s all I can think of.

Radio UTD: Gang Starr is from Boston??* Ok regardless, do you hope to achieve that level of fame and bring glory to your hometown? Because a surprising number of rappers I ask don’t want that.

Cousin Stizz: No… I mean, if fame gets me money then I’m with that. I mean, I don’t wanna achieve any levels of success that anyone else has ever had, because that’s their life and not mine, I wanna do my own thing and see what I can achieve. Go as high as I can go, so I’m not looking at anyone else’s career and wanting to be like that. I could be better than that.

Radio UTD: So who do you look up to for inspiration then? Both in music and for being an artist in general?

Cousin Stizz: My friends. Michael, Big Leano, my homies. I can’t look up to people that I don’t really know like that. Where I’m from I don’t look up to anybody, I definitely get influences, but my friends are the ones that inspire me. I get influences from everywhere though, I listen to a lot of music. But I can’t say I look up to anyone except my friends, because I see how hard they actually work.

Radio UTD: We were just listening to Mac DeMarco and Tame Impala, I never expected you liking them so much. What do you see in them?

Cousin Stizz: Shit that I can’t make! Their music’s so dope, I wish I could make that. I like music, I’m a real big fan of music. I love their vocals and instrumentals, so that’s why I fanned out when you played that. I like that psychedelic type thing, being on my own little wave.

Radio UTD: What has been the most difficult obstacle in getting where you are now?

Radio UTD: Reef, you mentioned earlier that you were getting into production, so what do you look for when you’re producing?

DJ Reef: I really enjoy sampling, so I look for that a lot. My recent inspiration is Thelonious Martin. I’m into a lot his beats, but there’s a lot of producers and artists that inspired me, and eventually I’ll craft my very own sound, but right now I love sampling.

Radio UTD: I’d actually say sampling is kind of having a resurgence, at least more so than it did in recent years. Like most recent sample I can remember really being intrigued by is “Momma” on To Pimp A Butterfly!

DJ Reef: It’s great because you can feel it in your soul. It’s immediate. On beats, I feel like I can go far. Hopefully I can give him some beats, but I know I have potential.

Radio UTD: Stizz, what can we except from you in the future? Suffolk County dropped and it’s been well received, so what’s the next step?

Cousin Stizz: Um… More. And tryna get better, everyday, something that puts me on a different level, continue to make sure my squad gets better, and that I get better. That’s it. Keep going.

Radio UTD: So like your recent song “The Wave”? Got some

Cousin Stizz: Not even like that song, because like… I love that song, but I know I can do better. My music now, like I made that song a while ago, my music now is better. I can be better.

Radio UTD: So no major musical shifts? Like you’re gonna be rapping over Yeezus beats next week or something?

*Upon further review, Guru founded Gang Starr in Boston, but the duo moved to New York when Houston native DJ Premier joined and formed the group as it is known today. Charge it to the game.