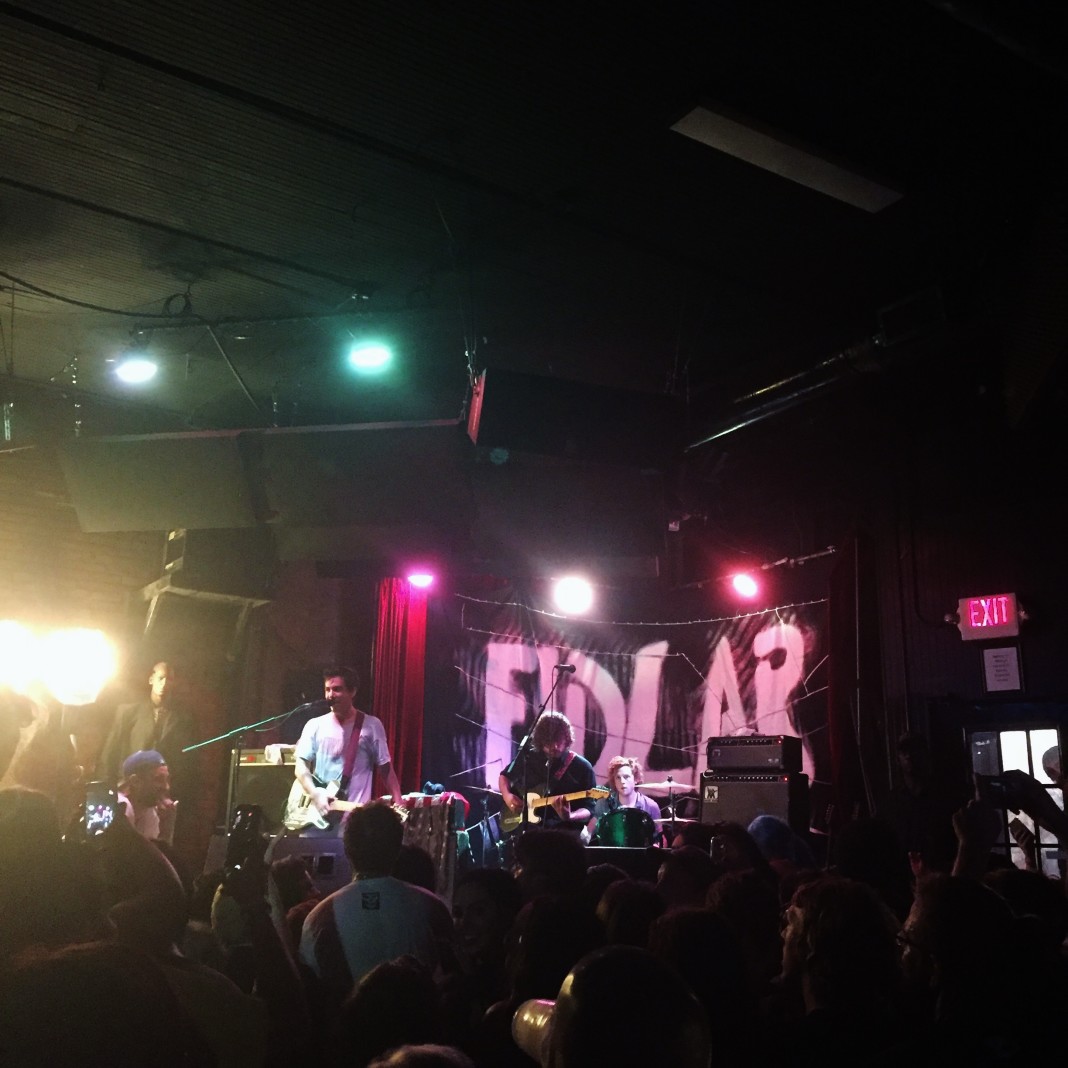 The crowd outside of Club Dada was eager with anticipation awaiting for doors to open for the sold out show. Concert goers quickly inundated the venue, ready to for the chaotic and sweat-drenched night ahead of them.

Dune Rats, the opening act from Brisbane, Australia, were first on the bill, within seconds Dune Rats’ ferocious tunes incited audience members to let go of their inhibitions and push and shove into one another. Frontman, Danny Beusa, demanded the attention of everyone in the venue with his aggressive guitar playing and peculiar facial expressions. Perhaps due to my lack of familiarity with aussie accents, the lyrics were indistinguishable from each other, but the throbbing guitars all but made up for it. They covered the Violent Femmes’ classic 1983 track “Blister In The Sun” which caused everyone present to erupt with excitement.

The stage was decorated with a life-size mannequin of R.Kelly and eerie scarecrow-like dolls with glowing heads. We were all packed like sardines on top of each other, death was imminent, but no one seemed to mind, we were ready to make this show a memorable one. At last, FIDLAR took the stage, all at once Club Dada came alive at the sound of “Stoke and Broke” off of their 2013 self-titled album. Without skipping a beat, or even giving fans the opportunity to catch their breath, FIDLAR plowed through favorites off of their debut album such as “Cheap Beer” and “No Waves”. The band with their catchy riffs and relentless guitars kept up the fervent energy and maintained everyone engaged despite the wide age range of attendees, from tweens to aging punk dads. However there was a small mishap, a member of the audience collapsed during the show, to which frontman Zac Carper in response urged everyone to “look out after one another if [they] see someone that doesn’t look too good” eventually the band started the song over and the show went on. Despite the relentless pounding and erratic dancing into one another in the pit, there was not a moment in which FIDLAR was not in complete command of the room, their pulsating guitars being the guiding light. One of the most awe-inspiring moments of the night was when frontman Zac asked everyone to sit down on the floor; the sticky, wet floor littered with questionable foreign objects lost by members of the pit, only to have everyone spring up at his whim, all for the effect of what it would look like to the rhythm of the song.

FIDLAR is the embodiment of controlled chaos and their shows are living proof of this. Their sophomore album shows the band growing as artists but that doesn’t mean their shows will become lackluster because of it. The band’s set ended with the album closer “Cocaine” off of their self-titled. The lights went up, R. Kelly’s “I Believe I Could Fly” blared through the speakers and frankly, I too believe I could fly, if only for an hour.