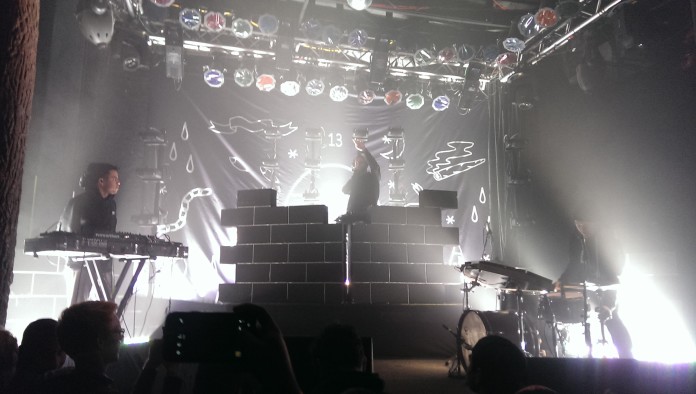 It was a gloomy Sunday night in Dallas, Texas and an unsuspecting audience was being transported to the depths of hell (we meant that in the best way possible) by electronic artist Nick Melons.The gloomy weather and ghostly red lights coupled with ethereal electronics and devilish vocal samples left the audience in an inescapable trance. As the night progresses with Melon’s set, the mood progresses as if it is climbing the rungs of a fiery ladder in an attempt to escape this inferno. The tempo began to pick up as Melons played tracks with Atlanta-trap inspired synths as well samples of London-grime rappers. Some springing xylophone samples gets a somewhat unresponsive crowd finally grooving and prepares them for the next set.

Still recovering from the spell of the previous set, We then found ourselves being guided through purgatory by Purple. The energy created by Nick Melons seems to be lost here in purgatory. Although Purple provides the audience with a wonderful array of dreamy electronics and a beautifully filthy bass, the audience stills seems disengaged. This can be attributed to the fact that there was a certain emptiness in Purple’s vocals. Although his vocals sounded as sweet as candy. The emotions of angst and sadness he tried to create came across as impersonal, and failed to create a connection with those listening.

Blinding white lights shining as bright as a thousand suns overcome the dreary audience; as we find ourselves ascending to the heavens. Shlohmo took the stage with his new live band, immediately captivating us with scintillating electronics and a bass that rattled you down to the core. Incredible lights add to the heavenly atmosphere, while Shlohmo and the band kept the audience in an endless grove. Shlohmo’s unmistakable vocal samples added another layer of beauty to the divine atmosphere. Shlohmo and the band left the stage leaving the crowd begging for more. Chants for an encore begin to grow from an insatiable crowd. The amiable performers finally decide to grace the crowd with one more song. A high tempo final melody with a marvelous bass and smashing high-hats puts the crowd into a state of ferocious dance. Alas the final songs ends, and the crowds hunger is finally satisfied.

All factors seemed to align perfectly for this showcase. The gloomy weather outside and the ethereal atmosphere created by Nick Melons and Purple matched together perfectly. Although the audience’s interest seemed to ebb in and out through the first two sets, the energy levels during Shlohmo’s set was enough to create an enjoyable night for all of those involved.