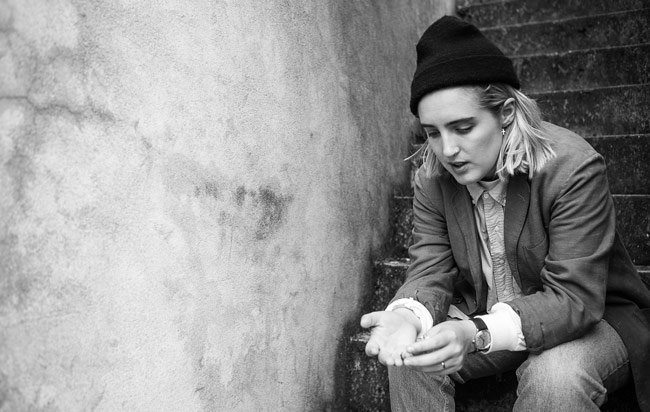 South by Southwest annually hosts a little over a couple thousand artists and while that may come as a disadvantage in regards to catching much bigger Billboard artists, it’s really about the opportunity you get to see artists that are up and coming. One of those in particular is London-based singer-songwriter and producer, Shura. Noting Madonna among her influences, Shura’s music is a fusion of 80s/90s pop and R&B. Her songs speak a lot about heartbreak and moving on that only her pairings with dreamy synths and light vocals can express.

It was a rainy Saturday morning in Austin. As a full day of chaos was ahead, I met Shura in the lobby of a hotel downtown. Before we begun the interview, Shura pulled a bright red pack of gum and offered me some. She began to talk about how odd it is that we have so many fruity flavors of gum here in America. I couldn’t blame her. I’ve always felt like gum was supposed to just be minty. “How about we turn this around and I interview you about all the things I’ve been finding to be crazy and weird here in America?” I would’ve been down for it. Read below as we cover Shura’s musical influences, what she likes about Texas, and what 2015 will look like for her. Radio UTD: So, first time at South by Southwest. Is this also your first time in America?

Shura: First proper time in America! I came here a couple of weeks ago actually. I played my first two shows at Rough Trade in New York and at The Echo in Los Angeles. We flew afterwards here to Austin. It’s been such a short time that it hasn’t really felt like I’ve been here. America is huge! I know it’s big, but when it takes you five hours to fly from one side to another, that’s how you know how far you’re traveling.

Radio UTD: What have you liked about Texas so far?

Radio UTD: Have you been able to catch any artists while here at SXSW?

Shura: It’s been really hard. As a fan of music, I find this a really difficult festival to see bands at. It’s tricky. You either have to get there early super early or it has to be a massive venue. I have managed to catch two of my top three artists who I wanted to see, which are Hinds and Courtney Barnett.

Radio UTD: You’ve been releasing singles here and there. One in particular that has garnered a lot of attention and took off following the release of the music video is “Touch”. Did you expect that to happen at all?

Shura: No way! I literally thought maybe 2,000 people would listen to it in like a year, and I would’ve been so happy with that because no one had ever really listened to my stuff before. The video is now at 8 and half million views on YouTube and the thought of that is absolutely crazy. It’s been really nice though. For a song that is super personal to me and about something tricky in my life, it’s been nice to know it’s the reason that I’m here right now. Without getting too hippie-dippy and 70’s flower power, everything has a knock-on effect and something that might be difficult at a moment in time can turn out to be the seeds for something really awesome.

Radio UTD: With that, can we expect an album or an EP out anytime soon?

Shura: *sarcastically* No, that’s actually it. I’ve quit. South by Southwest has made me quit music! *laughs* Totally joking. So I have a couple of shows when I get back. One will be my biggest show in London yet then I’m off to Paris. Afterwards, I’ll have two months to really work on and finish what will be hopefully the debut Shura record. I don’t want to release an EP first. I want to go in this with a full album.

Radio UTD:  Any idea what 2015-onward Shura will sound like and explore?

Shura:  Well, I draw a lot of inspiration from 80s pop music. Madonna is a massive influence on me. However, I’m hoping my sound will have elements of all my influences. I love shoegaze/psychedelic rock, but I also love R&B. I want the record to sound like a mix of different things without it sounding bad either. You know when you mix a bunch of different colors hoping to achieve a certain one, but instead you come out with a brown color and you’re really disappointed? I’m hoping it won’t be a brown album. I’m hoping it’ll turn out to be a nice mix of colors.

Radio UTD: Lastly, who would be in the band of your dreams?

Shura: That’s such a tough one. If I could, I would want to start an old pop/grunge band with Courtney Barnett, Laura Marling, the girls from Hinds, Warpaint, and Grimes. It would be this massive crew kind of like So Solid Crew but with guitars and girls.

You can check out Shura’s latest single, “2Shy” below and follow her on Facebook for more updates here.