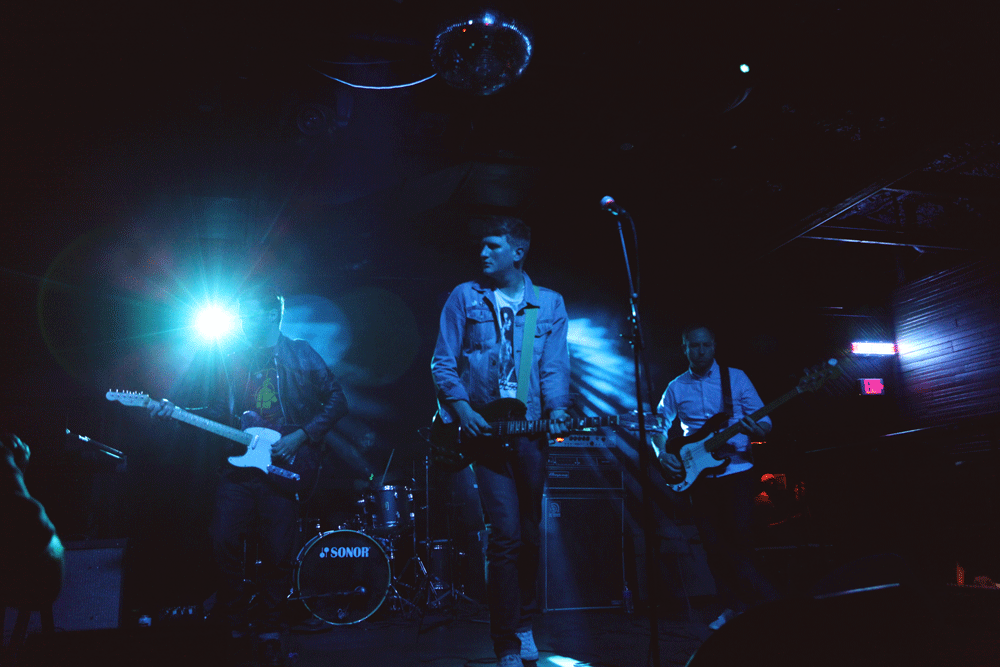 Orthy, also known as Ian Orth, started making music edits for parties he threw in Austin, Texas called “Learning Secrets.” He pursued his own music soon after, and acquired a band as well. Orthy’s sound is best described as celestial pop. The band has shared the stage with bands such as Kisses, Holy Ghost!, Superhumanoids, Ramesh, and Poolside. Yazz: So for starters, how was touring for a bit with Holy Ghost?

Ian: It was awesome! We’re from Austin, and the tour started there. It’s always fun to play at home.

Yazz: Was that the first time playing with Holy Ghost?

Ian: As a band, yes, but I’ve actually known Nick and Alex for a long time. The guy that plays bass in Orthy, his name is Jeremy. He and I both throw a party in Austin called Learning Secrets that we’ve been doing for about nine years. We’ve brought them down to DJ Learning Secrets like three or four times, and so when Holy Ghost! let us know they were coming through Texas with Midnight Magic (who we’ve also had at Learning Secrets parties) and asked us to play, we were honored.

Yazz: You recently released another EP, are you currently working on a full length album or the next EP?

Ian: Yeah, the second EP is coming out in January, but it is available for purchase now at our shows only. It’s given us time to really work on the live show and also work on the full length that can be expected early next year.

Yazz: So it’s mainly you behind Orthy. Has Orthy always been a full band?

Ian: Not really, I started making edits of disco songs to play at our parties for Learning Secrets, and one of those edits actually ended up in the hands of this guy named Tim Sweeney, who has a really popular radio show called “Beats in Space.” He played the edit a few times and then it ended up in the hands of Roy Dank, who runs a label called “The Wurst Music Co,” and he said he really wanted to work with me and encouraged me to explore the edits even further with original stuff. From there, I wrote a handful of songs, three of which Roy put out. So then, South by Southwest (SXSW) rolled around two years ago, and they wanted to book us as a band. Since I didn’t have a band, I scrambled and gathered my five best friends and basically taught them how to play these songs that I had, and it just went from there.

Yazz: What are some of your top influences when writing music?

Ian: Man, that’s tough. It’s really cheesy, but for the last two years, my first influence has been my relationship with my wife. She’s really inspired me to keep going with music because I am a little bit older and it sometimes feels weird to be doing something that I feel like I should’ve done in my early twenties. Also, I love dance music, especially house. I try to incorporate it into songs that I write for Orthy, but when it really comes down to it, the idea of vocal harmonies and guitar harmonies come from thinking about Brian Eno and David Bowie. Even as cheesy as things like listening to Boston and Supertramp. They inspire me too.

Yazz: How important do you think it is for bands nowadays to utilize different forms of social media such as Twitter, Facebook, Instagram, etc. as far as gaining exposure goes rather than the old days of putting your band out there with physical music, by word of mouth, or local publications?

Ian: I have really mixed feelings about it because it’s obviously really crucial for bands to engage in social media nowadays, but I look at our ‘Likes’ for example on Facebook and then I see some other bands sometimes, and I know that some of those ‘Likes’ earned aren’t as genuine or sincere. I don’t believe people should have to pay for promotion and I think that if you’re going to like us on Facebook or follow us on Twitter, it’s because you discovered us or you genuinely want to. On the flipside though, it is really important to for bands to engage in social media. It’s awesome and it’s not awesome.

Yazz: What can you say are some pros or cons of being an artist based in Austin, where you’re constantly surrounded by music?

Ian: Oh man, I don’t know if I have a long enough list. *laughs* I will tell you what the biggest con is though. You have to drive nine hours in any direction just to get out of Texas, and I think that’s why so many bands from Austin who might have the ability to tour somewhere don’t. The biggest pro is that it’s so easy to be a band from Austin and play in many different places for many different crowds as well as stumbling upon different outlets for a following such as websites/blogs for music reviews and what not.

Ian: Well first and foremost I am completely bias when it comes to college radio because I used to do college radio when I was in college. I was a music director and a promotions director at WRSU 88.7 at Rutgers University in Brunswick, NJ and I loved it. I think college radio is sometimes an underutilized tool especially in the local music scene in the terms of promotions for bands. I feel like a lot of local bands don’t realize they have an essential tool in their hometown such as college radio whether that college radio has a huge following or not. Even if it’s five dudes in a dorm listening to college radio, drinking some Natty Ice or whatever and a really great song comes on, they’re going to remember that radio station playing it. That’s how I discovered some great bands such as Pinback. It can be an awesome outlet for discovery.

Yazz: Lastly, is there anything major Orthy as band is looking forward to in the near future?

Ian: Well, the EP coming out in January is pretty big, finishing up the full length later next year is pretty big, and also a few things in the works as far as touring goes, but I can’t really say just yet. Lastly, some new changes to our live show is also what we’re looking forward to.

Yazz: Well, thank you for taking the time to talk with Radio UTD, and great set tonight!