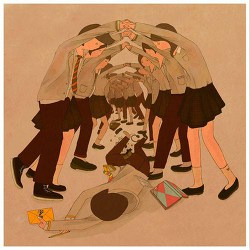 RiYL: Upbeat Death Cab, clapping your hands, Conor Oberst if he didn’t whine so danged much

The sound behind Her Space Holiday’s new album is, in a word: refreshing. Each and every track is upbeat and lovely; the vocal work is never too high or too low and maintains a catchy, smiling cadence throughout the CD. It is music that you play while driving fast; it is music with which you harmonize poorly.

That being said, the strongest part of the album is the vocal work. The lyrics are clever and catchy, not unlike Death Cab for Cutie’s semi-poetic, semi-prose style of song progression, except for the fact that the singsong melodies Bianchi weaves never seem to have a single thread of melancholy in them.

There is nothing outright bad or offensive about XOXO, Panda and the New Kid Revival. However, the instrumental side of the album seems to fall by the wayside: once the ear gets past the infectious lyrics, the guitars, bass, drums, and even the glockenspiel are accessible, functional, but not memorable. They work, and they certainly contribute to the album as a whole, but any listener is more likely to sing or clap than pay any attention to the instrumentals.

The album as a whole is entirely worth listening to, as long as you enjoy listening to happy, catchy songs that will have you humming for days. XOXO, Panda and the New Kid Revival is a solid album; it’s not perfect, but Bianchi’s singing and strumming will leave you smiling.