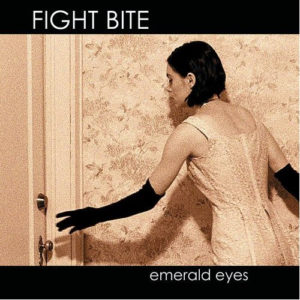 My introduction to Fight Bite came this past summer by way of House on Swiss, a heartfelt residential venue in Dallas with assorted monthly offerings. As usual, the lineup was posted, and I went to preview the acts on MySpace. Knowing beforehand that this duo had a member of Rival Gang, I was startled and impressed by the contrast of Fight Bite’s music. Obviously, Leany is interested in a range of musical expression, which makes her work more intriguing and real.

Based in Denton, Fight Bite consists of Leany and Jeff each singing and playing a keyboard. At live shows, the charming addition of colored holiday lights adds just the right amount of flare to their simple, elegant performances.

At the risk of being misunderstood, I have to confess that Fight Bite captures everything that was good about Enya. I was born in 1983; I’m allowed to feel this way. Remember the albums Watermark and Shephard Moons? Maybe your mom bought them and played them over and over until you loved them as much as I did. Or maybe you ordered Pure Moods off the television in 1994 and fell under its trance. Due to my own love affair with new age dreamscapes, I can’t help but feel that Leany’s soft and pensive vocals recall Enya’s perfectly satisfying texture and chord changes.

However, Fight Bite delivers a much more contemporary tune, one that’s slightly sparser – without a rollercoaster of flowery synths and too many echoing choral samples. Embracing the stripped down sound of pre-fab keyboard beats, Fight Bite grounds most of their songs with rhythms that range from waltzy (“Never Let Go”) to post punkish (“Small Wonder”). The crown jewel of Emerald Eyes is “Swissex Lover.” Voted “Best Local Single of the Year” by Dallas’ WSJR readers, it is well deserving of the title. I’ve been listening to the song almost daily for months and have yet to tire of it. Though it’s a tough call, Jeff’s backing vocals might be the most magical element of this track.

Overall, Emerald Eyes is a solid collection of songs that softly drone and swirl their way into the wistful and melancholic parts of your heart.