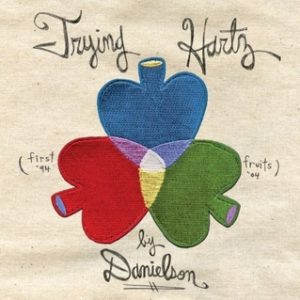 RIYL: The Fiery Furnaces, Daniel Johnston, The Apples In Stereo, and children’s songs!

To be honest, there are not many musicians that I just like as people more than Daniel Smith. I am convinced he is among the nicest and most musically creative people on this earth. The former, I am sure anyone who has seen him live or in any capacity would agree, while the latter is a topic of much dispute, due to his use of childish melodies and striking falsetto vocals. I believe that these two traits are essential to the personality of Daniel’s work and necessary in setting him apart from others.

Trying Hartz is the two-disk retrospectives of Daniel’s first ten years of musical endeavors from 1994 to 2004, including both Danielson Famile and Brother Danielson. Among the tracks are several live renditions and songs that had never made it onto albums that were released, providing pleasant treats for both those new and old to Daniel Smith. As always, the wonderful use of keyboards, xylophones, banjos, and other noise makers come together to create pure happiness that could make even the biggest square do the jitterbug!

While listening to this album, it became evident that this was the basis for Daniel’s most polished work to date, his 2006 release, titled Ships. It gave me a greater appreciation for Ships as an album and I definitely recommend listening to it following a thorough listen of Trying Hartz, in order to sense this progression of musical style and ability.

Although I could recommend every track, for the sake of the reader, I will select a few to focus on. “Flip Flop Flim Flam” is a wonderful song about shoes and specifically the company who makes the Danielson uniform shoe! “Good News For The Pus Pickers” and “Southern Paws” are both great songs that show the different sounds, both spastic and mellow, that have moved through the Danielson sound. Lastly, I would highly recommend the live recording of “Cutest Lil’ Dragon”, not just because of its amazing name, but also because, having seen this song live, it is just fun to sing about dragons!

Trying Hartz is a great place to start for those new to Danielson, but also a great refresher for those only acquainted with Ships. I think, in the end, my only reservations about this album is that it left me with the desire for new material by Danielson, something that I hope comes very soon.
– Garrett Burnett