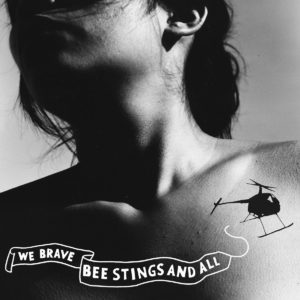 I’ve never been that good at grouping bands or albums into their respective genres, but if I had to, I’d place We Brave Bee Stings and All in the category of “folk pop”, somewhere between the catchy and the heartfelt. For me, pop music can kind of bleed into itself, and folk requires a certain desire and dedication to appreciate. That’s the beauty of “folk pop”: its refreshing versatility. It treads that easily accessible middle ground that can put you in the mood to hear it.

Thao does an excellent job of achieving the difficult balance of folk and pop. Bee Stings, unlike most folk pop, doesn’t sound like sappy, boring pop or kitchy, synthetic folk, it attracts and moves like pop, but never loses the organic, modest feel of a country-folk album. The track “Swimming Pools” features the bluegrassy pluck of a banjo and overlapping guitars just strummin’ away while Thao stresses that “we brave bee stings and all don’t dive, we cannonball.”. “Geography”, the next track, features a suspiciously guitar-like keyboard that flows quite well with Thao’s sorta bluesy vocals about “wanting someone– badly”.

Yeah, the whole folk pop thing has been done before, I agree. But there are a few ways in which Thao stands out from the crowd. First, the interesting, fairly obvious, though musically insignificant fact that Thao Nguyen is Vietnamese. I’ll be the first to say that Asians in the indie world are quite genius, but sometimes (quite frankly, most of the time) they’re a little too genius for me. Boris, The Boredoms, and MONO are all fantastic musicians whose albums I have little to no interest in listening to 98.9% of the time. Then there’s Ms. Nguyen’s mildly unique and convincingly mature singing voice, which I would liken to Chan Marshall (Cat Power) and, at times, Jenny Lewis (Rilo Kiley) with a touch of that Janis Joplin-esque hoarseness. Aside from how she looks and sounds, Thao Nguyen is a very talented musician, writing refreshingly honest and open lyrics and musing her guitar like a level 22 mage wields his bow staff, er whatever. Whether she’s strumming her pick to shreds, as in “Beat (Health, Life and Fired)” or picking her fingers to stumps, as in “Feet Asleep”, Thao manages to uphold a tone painful enough to be heartfelt yet playful enough not to be melodramatic.