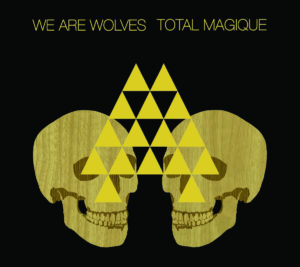 One time, my friend told me that someone wrote the word gullible on my ass. I hurt my back in the process of trying to find it. Thats how I found out that Im gullible But Im not stupid. Hes tried the same dirty trick many times since then, and, aside from the time the airplane supposedly wrote it in the sky with smoke, I havent looked. In my defense, anything written in the sky with smoke would be really awesome to look at.

Anyhow, the first time I picked this album up, I felt a familiar tinge of skepticism It seemed too familiar to be a new album. If youve been reading my enormously insightful reviews thus far, youll catch my meaning in a jiffy. This album has almost all of the same indie cred factors as Le Loup: a wolf-related moniker, gold-on-black cover art, D.I.Y.-ish sleeve art, and lots of French stuff. It may even be possible that We are Wolves has more indie cred, seeing as they are from Montreal, whereas Le Loup hail from the remarkably less indie Washington DC. I just couldnt believe it

And when I heard the album, I immediately knew why: Im not stupid. Not that I was fooled into liking Le Loup; its a great album, Im just not going to buy into this because its marketed with a strikingly similar facade. As it turns out, this album is something of a sheep in wolves’ clothing A really angsty, alcoholic, rock-n-roll, teenage party-sheep A bad, yet irresistible analogy.

To be frank, I dont feel that this deserves much more of your attention than an Andrew W.K. album, the last of which (conveniently for me) just so happens to be titled The Wolf. Total Magique features muddled lyrics about parties, doing drugs with friends, and relationship problems projected in an all too common Ghostland-ish mega whine over ceaseless high-end guitar strums and rumbling synths. Sadly, never was there a moment in this album when I felt like I was hearing something new.

To be fair though, this album is not complete trash. The band has a lot of energy, and provides a commendable amount of fast-paced, mindless, totally HXC entertainment. Theres nothing wrong with indulging in the simple pleasures of a roaring synthesizer every once in a while, although I think there may be better ways to go about it. It just seems to me that this band is trying to appeal to too many people at the same time, making them difficult for any one discriminating person to buy into completely.